Before and After at Austin Studios

The big plans after the National Guard Amory take-over

The long-awaited takeover of the National Guard Armory by Austin Studios finally happens this October, and the Austin Film Society already has very specific plans for the space – plans they believe will attract big productions and nurture local talent. 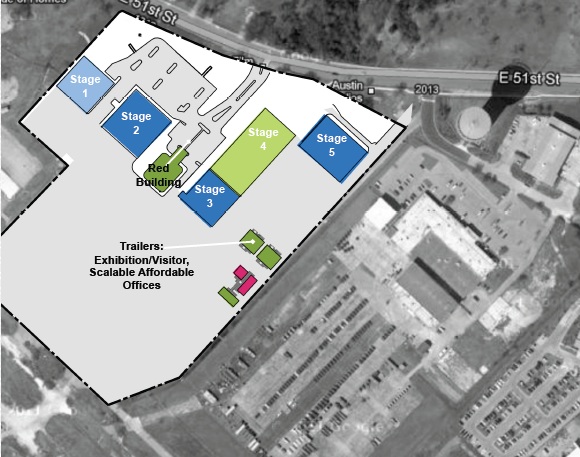 The 20 acre studio is currently in what Austin Film Society Executive Director Rebecca Campbell called "an interim configuration." When they originally moved in, the site extended further west, but that's now being developed as an H-E-B to serve the Mueller development. The studio hopes that their own planned renovations will make it on to the city's November bond package. After all, this is still city property, and Campbell believes the investment will result in new business and new jobs. So expect advocates for the proposal to attend the special called meeting of the Bond Election Advisory Task Force today at 4pm at City Hall.

At the moment, Austin Studios is really only working with three stages, and only one of them is available. The big tenant is ABC's The Lying Game, which has taken over stages three and five, plus a stretch of the parking lot (it's doubling as the outskirts of Scottsdale.) Stage one currently houses the vendor firms, and stage four is becoming the core of a creative hub through the lease to Soundcheck. That just leaves stage two, and that's currently crammed with props and equipment.

As for office space, the iconic Red Building is being leased to small tenants (see more about that in today's issue). Meanwhile AFS and studio management is working out of some trailers, and The Lying Game just took one of those over to serve as its own semi-permanent production office. 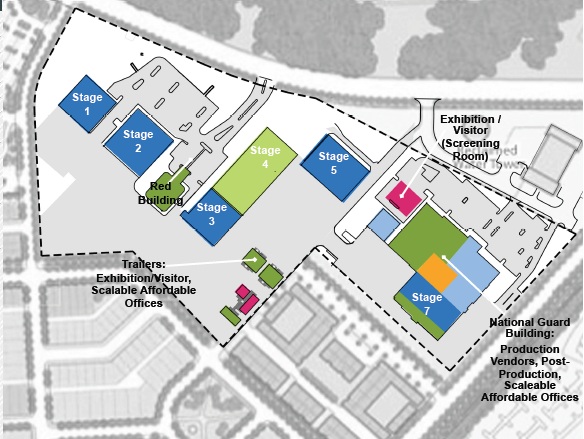 So what happens on October 1, after the National Guard hands the armory over to the city, and then (after some essential remediation) the city hands it over to the studio? A lot.

First off, the studio loses some of the big stretch of parking in the south-west corner: That gets integrated back into Mueller to become housing. In exchange, the studio gains 63,000 square feet of property and infrastructure. The big gain is the armory's main building, and a big plus is that it's made of brick. Austin Studios Facilities Manager Martin Parrington said, "One of the greatest insulators for sound is air, so if you're looking at a cinder block, you've got concrete, essentially, a gap of air, and then concrete, so it lends itself well to our industry."

The studio management already has pretty clear plans for what it wants to do with each space.

– A helicopter hanger will be converted into stage seven.

– New dedicated space for production vendors. Their current tenants were originally in hanger space now being flattened for the H-E-B construction. Converting the armory building means they will be able to move out of the less-than-perfect stage one into more suitable spaces. The extra bonus is that this frees up stage one for productions.

– The rentable office space almost trebles, rising from 16,265 square feet to 42,235 square feet. The key for Campbell is that the offices be "scalable and affordable." She said, "[Tenants] will have their 300 square feet that they have year round, then they can go up to 10,00 square feet if it goes into full Hollywood mode, or if it stays small and indie it can go to 2,000 square feet."

– The plan also allows for 6,000 square feet of post-production facilities – a first for the studio.

– Further down the line, the society will raise private cash for a dedicated visitor and exhibition center. The site already hosts around 4,400 visitors a year, including students on field trips, but AFS hopes to boost that to over 40,000. That will include a new space for AFS screenings. "We wanted to have a couple of our own screens, over and above the humble screening room that we already have," said Campbell. There's some consideration to providing some space for the Texas Film Hall of Fame. Campbell said, "We do these wonderful clip reels to honor people's careers, and a lot of times you find out about an actor that, oh, I know his face but I never knew his name."

– Any parking lost to the south will be replaced by more convenient spaces at the armory building, including several slots out front.