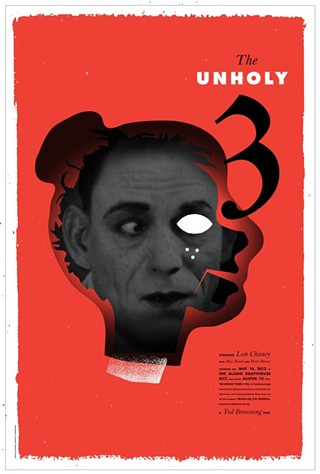 "THE UNHOLY THREE" by Jeff Kleinsmith

Stick around long enough, and decay is inevitable. It's true for humans and for film stock: Half of all films made before 1950 are now lost forever. Preservation and restoration are the clarion calls of Martin Scorsese's nonprofit The Film Foundation; their cinematic saves are the focus of a new film series with Mondo and Alamo Drafthouse.

Kicking off this Monday with Hitchcock's Shadow of a Doubt, the eight-film series will pair restored 35mm prints with original poster art from Mondo. Sneak-peeped here are the art contributions of Jeff Kleinsmith's The Unholy Three, Delicious Design League's Film, and Elvisdead's The Old Dark House; other artists featured in the series include Alan Hynes, Laurent Durieux, Jay Shaw, and the Phantom City Creative.

The series runs Monday nights at the Alamo Ritz. The lineup includes:

May 7: Shadow of a Doubt (1943)
Joseph Cotten plays the suavest serial killer around in the thriller Hitchcock once pegged as his favorite from his filmography.

May 14: The Unholy Three (1925)
This is the original Tod Browning silent, starring Lon Chaney and screening here with a live score by Peter Stopschinski & Graham Reynolds. Also screening that night will be Alan Schneider's “Film” (1965), a silent short starring Buster Keaton and scripted by Samuel Beckett.

May 21: Rashomon (1950)
Kurosawa's international breakthrough is a masterstroke in unreliable narration. (See: "The Rashomon effect")

June 4: Paths of Glory (1957)
An unflinching look at war and a meditation on what is bravery, this was Stanley Kubrick's first collaboration with future Spartacus Kirk Douglas.

June 18: The Night of the Hunter (1955)
Charles Laughton moved behind the camera, his only whack at it, for this Southern gothic spine chiller. It's a good bookend to Shadow of a Doubt, though Cotten's Uncle Charlie's got nothing on Robert Mitchum's murderous con man with hate in his heart and hard-lettered in ink across his knuckles.

Tickets for series starter Shadow of a Doubt are on sale now; the remaining shows will go on sale soon.