From the Vaults: 'Bernie' Kills 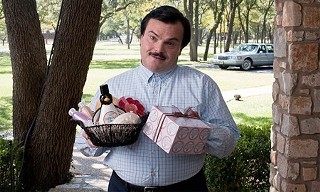 Austinites this weekend demonstrated that movie sophisticates in New York and L.A. have nothing on the home-town crowd. Richard Linklater's new film Bernie opened on Friday in exclusive runs in New York, L.A., and Austin, and experienced the best opening weekend ever for a Linklater film.

The weekend's more than $30,000 estimated per-screen average from just three venues is Linklater's all-time best. Studio releases like School of Rock and Bad News Bears may have earned larger overall grosses in their opening weekends, but their per-screen numbers (an indicator of general interest) are diluted by their wide openings on thousands of screens. Moreover, Bernie's weekend estimates of $90,400 appear to be evenly divided among the three cities – meaning that Austinites did not come out to the Violet Crown Cinema in disproportionate numbers to support their home-town film hero nor did they slack in relation to their big-city brethren. Here's hoping that the math of this three-screen opening holds up as the movie rolls out to more theatres in the coming weeks.

One needn't dig very deeply into the Chronicle's archives to find numerous features published over the years on Rick Linklater and his films. I want to here point out some of my favorites from recent years. In 2003, Chronicle editor Louis Black, who appears in Linklater's first film, Slacker, wrote a history of the paper's early relationship with the future director in "The Austin Chronicle and Richard Linklater." On the occasion of Slacker's 10th anniversary in 2001, I interviewed Linklater and his producer's rep, John Pierson, to get their now relatively distanced perspective on the Slacker phenomenon in "Slack Where We Started." After another 10 years, Marc Savlov revisited Austin's watershed film moment in "Slack to the Future." Then in our 30th anniversary issue last year, John Pierson, now living in Austin and teaching at UT, authored "Remember That Issue … With a Delicious Scandal?," an account of the brouhaha that erupted when the Chronicle printed extensive excerpts from set diary Linklater kept while working on his second film, Dazed and Confused.

Known for re-teaming with many of the same actors throughout the course of his career, Linklater hews to that habit in Bernie. So forthwith are links to some of my favorite Chronicle pieces about Bernie co-stars, Matthew McConaughey and Jack Black. In 1995, Matt Zoller Seitz wrote one of the first major profiles of McConaughey (who got his big breakout in 1993's Dazed and Confused). "Lone Star Rising: The Luck of the Drawl," from Sept. 1, 1995, was that issue's cover story, although none of the story's artwork appears with this online link because it dates from the Chronicle's Paleolithic Era of the Internet. If the cocky young actor on the verge of national stardom for his turn in Lone Star comes through without the photos, his charms are absolutely percolating by the time Margaret Moser interviews him the next year in "Adonis Rising," when the actor was promoting his starring role in A Time To Kill. Jack Black, too, was our cover story when he starred in School of Rock in 2003 and came to Austin to attend an AFS Texas Filmmakers' Production Fund benefit screening. Among other things he discusses in "Black and White and Rick All Over" is his hope to film a Roky Erickson biopic. See the article's photo of Black and Erickson side-by-side backstage and you'll have no doubt that Black is the man for the job.

And of course check out our coverage of Bernie in the current issue: Marc Savlov's review and my interview with Linklater and McConaughey, "Texas Two-Step."