Your Feets Too Big: Book Signing & Screening at the Lucky Lizard

Shave and a haircut? Two bits.

So there you are, your sweetheart and you, camping and canoodling deep in the heart of the East Texas/West Arkansas piney green woods. Maybe knocking Docs, even. And then, without warning, amidst the panting de l'amour and the whispering wind, you hear it: the unmistakable sound of your impending doom.

No, it's not Jason or even Harry Manfredini (horror scorer of Friday the 13th's omnipresent "shh-shh-shh-hah-hah-hah" theme). It's the lanky, cranky, and altogether furry subject of Fort Worth-based cryptozoologist (and Ghoultown frontman) Lyle Blackburn's new non-fiction epic The Beast of Boggy Creek: The True Story of the Fouke Monster.

The what? Think of this legendary, possibly nonexistent Sasquatch-wannabe as pretty much the only claim to fame for the tiny Arkansas backwater of Fouke. Described and witnessed countless times over the past two centuries, the Fouke monster inspired everything from 45rpm ditties to the Alamo Drafthouse's Weird Wednesday favorite, Charles B. Pierce's schlocky 1972 semi-gem The Legend of Boggy Creek. (Not to be confused, although we can see how you might be, with The Legend of Billy Jean, seeing as how both films make us wonder: whatever happened to Christian Slater?)

"I was always interested in Bigfoot and all that when I was a kid," explains the author, who, it should be mentioned, is every bit as good a writer as he is a psychobilly frontman-cum-guitar slinger. "At some point my parents took me to see The Legend of Boggy Creek at the drive-in. Prior to that I pretty much thought Bigfoot-type animals were limited to the Pacific Northwest region of the country. It really struck home with me to realize that there might be creatures like that living right around [where I lived].

Blackburn, who pens a cryptozoology column for Rue Morgue Magazine, figured that since no one else had ever tackled the subject of the "is it or isn't it (real)?" Fouke Monster in print, he'd give it a shot. The result is a wickedly readable treatise on not only Arkansas homegrown horror, but also a smart piece of backcountry anthropology and a detail-oriented dissection of the making and marketing of Pierce's film.

The author hedges his bets as to whether the creature actually exists, although he notes that it's hard to ignore the list of sightings and encounters that date all the way back to before "Bloody" Andrew Jackson sent the area's indigenous inhabitants away from the encroaching Eurocentric settlers. All in all, it's a helluva read and a pretty unforgettable (although technically crappy) movie. And since there's absolutely nothing else going on in Austin this weekend, why not take a break from all that nothing and indulge in a little cryptic slaughter fun?

Blackburn will be signing copies of his book as well as hosting a screening of Pierce's film, this Saturday, April 28, 5-7pm, at The Lucky Lizard & Museum of the Weird (412 E. 6th St.) 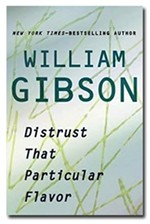 Why is William Gibson at BookPeople Tonight?
Because you should definitely distrust that particular flavor