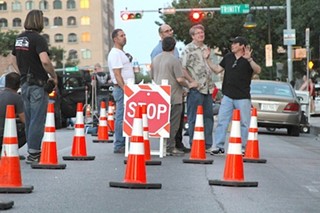 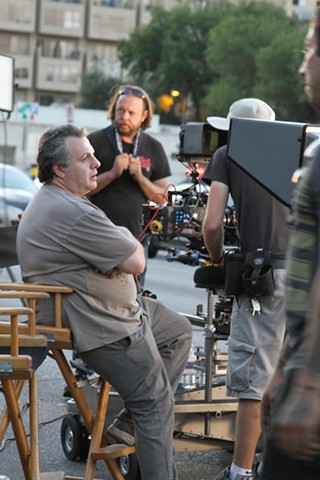 No animals were harmed in the making of this PSA. (by Marc Savlov)

If you were downtown in vicinity of Eddie V's Edgewater Grill Sunday afternoon or evening, you probably assumed all those road blocks, light baffles, grips, dollies, and APD cruisers were involved in Machete 2: The Sharpening. If only.

What you were witnessing wasn't a new Robert Rodriguez shoot, although much of Machete was shot on that same Fifth Street and San Jacinto block. And that large fellow in the director's chair barking "Action!" en Español wasn't Kid Troublemaker, either.

No, this was an Austin Police Department public service announcement being filmed for a national, mainly Hispanic audience. (Meaning you may see it air on Univision or Telemundo, but probably not Fox News.) The message? "Click it or ticket, homeslice!"

Directed by Los Angeles-based Gustavo Garzon and produced by Gerard Lodico of San Antonio's Cibolo Films, the PSA warns of the dangers of not wearing your seatbelt, a Class C Misdemeanor in Texas.

Unfortunately, this not being a Troublemaker Films production, the finished project is unlikely to have any punchy visual panache along the lines of Grindhouse's OMFG head-on collision -- woohoo Stuntman Mike! -- that'd really make you buckle the fuck up. No sign of Danny Tréjo, either, but we're suspecting the APD's budgetary concerns are more pressing than their quest for costly pyro effects and/or fender bending vehicular gags.

It's not the disuse of seat belts that makes the Sixth Street area such a hotbed of all-night sirens and the APD's new, improved, four-wheeled laser effects spectaculars. (Seriously, the ultra-bright lightbars on the new cruisers verge on discotheque overkill; it's all some people can do not to pop some ecstasy and crank up the Happy Mondays every time those telltale red, white, and blue strobe begin to pulse.)

More pertinently, it's the dozens of daily DUI's we witness firsthand that creep us out, living in the thick of it as we do. Maybe the APD could reach out to George Romero and Greg Nicotero (or Guillermo del Toro, for that all-important Hispanic market) for their next PSA. Hell, we've even got the tag-line for it already: "You drink, you drive, you die...and that's just the beginning!"