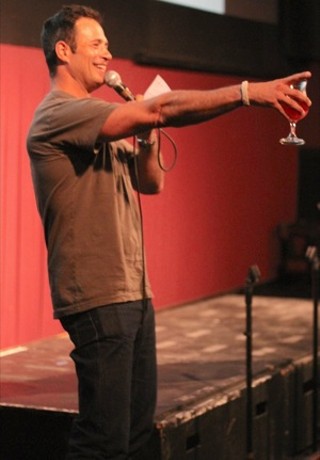 Friday night's screening of Sergio Leone's spaghetti western masterpiece Once Upon a Time in the West was accompanied by a feast, courtesy of Chef John Bullington, of equally epic proportions. Six courses, each paired with a selection from fest sponsor Dogfish Head Brewery's many, many alcoholic offerings.

It was, to coin a new and necessary word, a gourmandorgy of magnificent proportions. Six courses, six Dog'head samplings, and six-shooters gone wild in the maestro's restored, 195-minute (according to the Alamo's web page) saga of vengeance and vice on the eve of the West's demise via railroad. All that and Lionel Stander, too. What more could a filmfoodie ask for?

"In general," explained Calagione, "the reason we do 30-something different beers is because everybody's palate's different and different people love different-flavored beers. The giant brewers tried to squash that but people responded that they wanted many more varieties.

"It kind of reminds me of what [the Alamo Drafthouse does]. It would be very easy to be like most cinema groups or theaters and just do first-run movies, and so to see something like [Once Upon a Time in the West] on a giant screen in 2012, or Blazing Saddles on a giant screen, while you're drinking good beer is a pretty rare thing."

True enough, and oh our aching bellies, what a feast! We've attended nearly all of the Alamo's food-and-film pairings, and we can say with zero hyperbole that this was Chef Bullington's finest hour. (And to a sold-out house, no less.) Kudos, then, to his battalion of kitchen demigods and the Alamo's overworked servers, who did an amazing job of keeping our forks hitting our plates even when the action onscreen demanded that we dare not look down for even a moment.

The menu? Glad you asked:

Ahem. Speaking of expanding waistlines, as Henry Fonda's sublimely taciturn villain Frank says, "How can you trust a man who wears both a belt and suspenders? The man can't even trust his own pants." 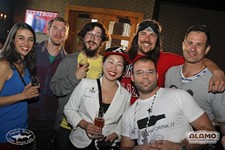 Perfect Pairings at Off-Centered Film Fest
We go together like brewers and chefs, music and beer, Kung Fu, hair

Off-Centered Film Festival, Once Upon a Time in the West Feast, Alamo, Dogfish Head