"I like more characters who are more passionate than dramatic," said writer/co-director Andrew Matthews (with fiancee Katie Graham) about the locally-produced geekgasm comedy Zero Charisma, currently shooting in South Austin.

No wonder: the film's producers include Magic Stone Productions' Michael and Lindsay Stephenson, of Best Worst Movie fame, and, in his debut role as Line Producer, the Alamo Drafthouse's own Zack "I don't even know what a Line Producer does!" Carlson. The film is in fact shooting in Carlson's own house, current residence of Mondo overlord Justin Ishmael. Consider it a family affair, then, of a sort, albeit one that involves set visits in which Carlson's skills with a electrified badminton-style insect destroyer are well deployed. (Seriously. We totally want one.)

Twenty-five-plus actors, crew, and assorted hangers-on (that'd be us) crowded into Carlson/Ishmael's living room this morning for a toasty (bright lights! cables! controlled chaos!) taste of the Dungeons & Dragons-esque comedy synopsized as thus:

"Twenty-nine year old Scott Weidemeier spends his time in exactly three ways: working a menial job at a local donut shop, caring for his ornery and abusive grandmother, and playing table-top fantasy games. Dungeons & Dragons is more than a game to Scott – it’s a calling, and as the Dungeon Master, he wields referee power over his players with an iron fist.

"That is, until a new player enters the game: Miles Butler, a stylish, funny “neo-nerd” hipster who quickly charms everyone he meets. In his desperation to outshine Miles, Scott alienates himself from his peers, and eventually loses his game to this interloper. On top of that, the health of Scott’s grandmother takes a turn for the worse, and his estranged mother Barbara swoops in to take the house right from under his nose.

"As the humiliations pile up, Scott struggles to retain some shred of dignity – even if it means a final duel with his greatest adversary."

Mmmmm … sounds Austin-y! And, as one who wept when D&D creator G. Gary Gygax passed away, we can tell you up front there's an audience just waiting to salivate over this tabletop battle royal.

"We knew we were making a movie about 20-something people," said Graham, "and we wanted an unlikely star for that, you know, the underrepresented 20-something."

"For somebody who isn't into role-playing games and that kind of stuff," added Matthews, "it may look from the outside to be not as important as other things. But it doesn't matter that it's unimportant to other people. Because it's important to him. It's that kind of character where you see them and you say to yourself, Oh! I know exactly what kind of person that is!"

"And those are the kind of most comedic characters in a way," finished Graham. "I know that guy!"

So do we. We were that guy, and, in most of the way that count, we still are. 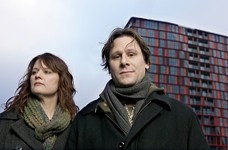