Mel Gibson premieres new film 'Get the Gringo' at Alamo

It may have seemed like a bad idea to invite noted Mel Gibson to premiere his newest film, Get the Gringo, at the Alamo South Lamar on the eve of World Holocaust Remembrance Day, but the Oscar-winning former Road Warrior and current Joe Esterhas-hater behaved himself and the film rocked.

A supergritty, fairly witty, and very Robert Rodriguez-inflected tale about a bank robber (Gibson) tossed into Juarez's notorious Pueblita prison and then marked for death after he befriends a 10-year-old boy and his mother, the Aint It Cool News-sponsored event went down like a cold Tecate on a sweltering summer day. Bullets, bloodshed, and plenty of the old crimson filled the screen, as did Gibson's purring whisky-and-Marlboros voiceover.

Apart from the film, which is slated for DTV-only release next week, more than a few people who attended were talking about Gibson's recent and hypervitriolic war of words with screenwriter Joe Esterhas and, of course, the actor/director/writer's previous anti-Semitic rantings.

The film, which was simulcast to various theaters across the country, was followed by a relatively tame Q&A, with AICN's Harry Knowles fielding texted questions from a monitor down front. Alongside Knowles were Get the Gringo's director and co-writer Adrian Grunberg (Gibson's first assistant director on Apocalypto, by the way), teen co-star Kevin Hernandez, and producer Stacy Perskie.

Apart from the more typical lines of post-film audience queries, Knowles at one point slipped in a pointed question of his own:

Knowles (to Grunberg): "So I see that you've got a Star of David on … did y'all have any trouble working together?"

Grunberg: "Well, I have two things here. I have a Star of David and the other is a picture of Jesus de Padre."

Knowles: "And you told me that Mel's awesome to work with. Is that true?"

Grunberg: "Absolutely. I've known him for six or seven years …."

Knowles: "I just … think it's something that people should say because [to Gibson] you get under a certain amount of fire and you get, y'all work together and have a good working relationship and everything seems fine."

Knowles, who has hosted Gibson at the Alamo twice before (once for a Butt-Numb-a-Thon with a work-print Passion of the Christ and then again with Apocalypto), lobbed a softball there, to be sure, but the audience vibe appeared to accept the exchange for what it was, which, really, wasn't much of anything. Frankly, given the Esterhas audiotape, everyone knows that Gibson needs therapy of some sort. Maybe his just-announced Viking epic with Leonardo DiCaprio will be just that.

DVDanger: Mad Max
Before we hit Fury Road, the original revs up 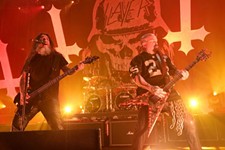