Darren, the Devil and the Drowned Souls

Saw' director Bousman opens the tent of 'The Devil's Carnival' 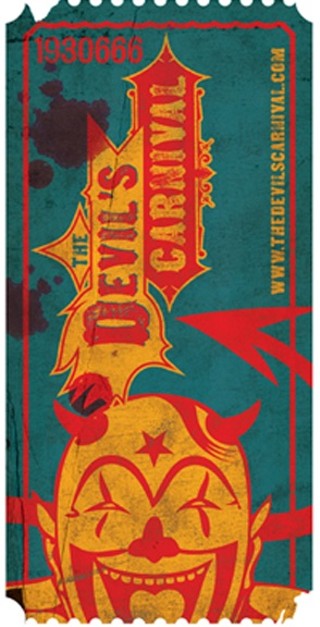 Darren Lynn Bousman went to Hollywood to make musicals. There were no musicals to make, so he made horror films. Then, one day, he decided to make his own musicals, and the devil take everyone else.

Last Thursday, he took over the Alamo South Lamar for his latest, The Devil's Carnival: A labyrinthine morality tale plucked straight from the pages of Aesop's Fables and given a demonic spin. Three doomed souls find their way to this hellish boardwalk, and there are far worse things than rigged ring toss to contend with here.

Bousman and his longtime collaborator-composer Terrance Zdunich will actually be touring the film far longer than they were making it: A compact six day shoot has now parlayed into a nationwide tour running right through May. This is more than just the traditional screening with a Q&A: Bousman brings a full sideshow feel within his fourwalling endeavor, complete with blockheads, knife juggling and burlesque. "We're giving you an experience you can't download," Bousman explained.

It's a fiendish union reversed: After all, many early reels were screened as carny-style attractions, and the first PPV was arguably the old boardwalk 'What the Butler Saw' machines. So it's high time the cinema returned to favor. Bousman said, "Terrance and I are basically doing this by ourselves, with a couple of other people in a stinking van."

For horror fans, Bousman remains best known for his work behind the lens on Saws II-IV – turning a one-off oddball hit into a multi-billion dollar franchise. Yet for a generation of disaffected goths and romantics he's the man behind Repo! The Genetic Opera. That started off as a live show, which they then converted into a film that they toured and toured and toured until it became a contemporary kin to The Rocky Horror Picture Show (complete with shadow cast screenings). That explains the packed audience, and the fact that some hardcore faithful were in costume as Carnival characters, sight unseen. They were greeted by a lot of Repo! veterans on screen, including horror icon Bill Moseley, Ogre of industrigods Skinny Puppy, and Alexa Vega of Spy Kids fame. Zdunich also adds some intriguing new talents to the script: Some well known around these cinematic parts, such as Mark Senter of Red White & Blue: Others, such as goth chanteuse Emilie Autumn and the scowling mad genius behind Slipknot, Shawn "Clown" Crahan, are fresher meat.

Even with its contracted 55 minute run time, Carnival leaves the body-snatching operetta bleeding out on the operating table. Bousman relishes the theatricality of the affair, and Zdunich (who also scored Repo!) must have added a whole new wing to his music collection. Gone are the over-inflated Andrew Lloyd Webberisms of Repo!, which never quite overcomes its roots as as adapted stage show. By assembling a circus orchestra, Carnival gets drenched in sideshow squeaks and squalls, pulling hard on its hurdy-gurdy stylings. Zdunich borrows a threepenny or two from Kurt Weill and repays tenfold. In a fair and just cosmos (which, as Carnival gleefully notes, we do not live in) Ivan L. Moody's rendition of A Penny for a Tale as the Hobo Clown would win next year's Best Song Oscar. And, yes, that's Ivan L. Moody from power metalers Five Finger Death Punch. The only real competition should be the siren song of In All My Dreams I Drown, performed by Zdunich and Jessica Lowndes.

The carnival life is a hard road to travel, what with Youtube bootlegging scum pulling the money from yer pocket. As Bousman explained, "Repo drained my bank account. This squeezed the last few drops out." The only solution was a pledge of honesty ("I promise not to be a douchebag and film the awesomeness I am about to see. If the person next to me does, I shall punch them in the balls or vagina") and the promise of more. If part one is successful, then Bousman plans a whole series: And the final scene (which includes another surprise cameo from a Repo! veteran) sets up fascinating potential for a whole cosmology. If the audience is there, Bousman said, "This is part one of a thing that will go on forever."

The Devil's Carnival roadshow continues through May 11. More details at TheDevilsCarnival.com