Awesome Overload: Alamo Does the Kobayashi Maru Class of '82

You can run but you can't hide.

Where were you in 1982? You weren't born yet? Being late to the party is a weak-ass excuse, and now it's not even that. Thanks to the Alamo Drafthouse's imminent "Summer of 1982" series, you can experience that insanely great summer's best films on the very day they were released. But, like, now -- no dodgy time travel necessary!

Thirty years on, what could be be more historical than that? How about if the Alamo suddenly added a dozen more films to their initial eight, among them Albert Pyun's goofy-great, edged weapon extravaganza The Sword and the Sorcerer, Larry Cohen's underrated Q: The Winged Serpent, and – Fizzgigasms galore! – Jim Henson and Frank Oz's The Dark Crystal? Damn. That's very nearly overkill. Badges are on sale starting at 11am today, April 17.

As anyone over the age of thirty patently knows, the summer of 1982 was a perfect storm of cinematic kickassery. The month of May alone was an ultraviolet, uber-cool, cage match-to-the-death between John "God of Testosterone" Milius's Conan the Barbarian, Gary Sherman's rarely re-screened Vice Squad, Cold War overview Rocky III, and our all-time personal favorite, George Miller's life-changingly excellent Mad Max 2: The Road Warrior. (Well – okay, that last one is neck and neck-with-spider-legs-on-it with John Carpenter's The Thing. But still –)

True story: we blame George Miller for what happened to our father's car back in the spring of 1982. The suddenly sideways alignment, the shattered shocks and suspension, and the nonexistent right front headlight were but minor vehicular chaos compared to the mind bomb that was The Road Warrior. This was, after all, merely a 1980 Chevrolet Citation we're talking about, a justly unsung automotive also-ran and star of zero cinematic exploits. Nothing like Kowalski's vanilla '70 Dodge Challenger R/T in Vanishing Point, or Phantasm II's '71 Plymouth Hemicuda, or even the 'rents boxy Ford Taurus station wagon. Why the old man became so annoyed irritated frighteningly furious when we pulled into the garage that night is, in the hindsight of adulthood, obvious.

But here's the unshakeable truth about seeing The Road Warrior for the first time at the age of sixteen: it makes teenage males drive like Mel Gibson's Max Rockatansky for hours, even days afterwards. Cars + death + leather = a lead foot and potentially Wheels of Tragedy-style fun.

Hitting that railroad crossing – twice! – at a breezy 70-plus mph – airborne! – and then nearly rolling that frankly unrollable Chevy Demerit on a dusty stretch of backcountry farm-to-market hardpan were the iffy, adrenalized decisions of a wreckless youth spent gorging on genre cinema. But that night, the pricey structural damage we had incurred to the car went unnoticed. Not while the Humungous ruled our mental teenage wasteland, anyway.

No, our real mistake was setting off a handful of smoke bombs in the car's ashtray. As cruel experience quickly schooled us, nothing pisses your padre off more than seeing his daily driver slouch into the driveway with plumes of violet smoke billowing from the open windows. Parental apoplexy isn't pretty, but it's a helluva life coach.

Yeah, we admit it: we were grounded for the better part of the summer of 1982. But thanks to the Texas panhandle's preference for handily jail-breakable ranch-style homes, we were able to pull a Don Siegel and escape from that particular Alcatraz back into the night, and from there into the more precious darkness of the local fourplex. (There were benefits to living in the analogue age, to be sure.)

To this day, we go all gooshy inside thinking of that summer's smorgasbord of genre delights. The Thing's "I don't know what the hell's in there, but it's weird and pissed off, whatever it is," is a line of dialogue right up there with "Rosebud –" in our hearts. The same goes for outer space ubermensch Khan's memorable take on Herman Melville, from Star Trek: The Wrath of Khan: "To the last I will grapple with thee, from hell's heart I stab at thee, for hate's sake I spit my last breath at thee!" Poetry in motion, especially when delivered in the rich, Corinthian leather tones of Ricardo Montalban.

In addition to the twenty films slated for the Alamo's '82 reboot, Mondo's working their poster magic, guest hosts abound, and much fond quoting of "What is good in life?" in bad, Schwarzeneggerian accents will occur. Forget all that "Crushing your enemies, driving them before you, and hearing the lamentations of their women" jazz … this is what's truly good in life. 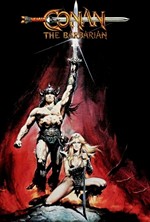 Alamo Summer of '82: "Do You Want to Live Forever?"
Alamo '82 debuts with 'Conan the Barbarian'

Summer of '82, Alamo Drafthouse, The Road Warrior, Mad Max, The Thing, John Carpenter, Q - The Winged Serpent, The Sword and the Sorceror, Mondo