The Industry of Light and Magic 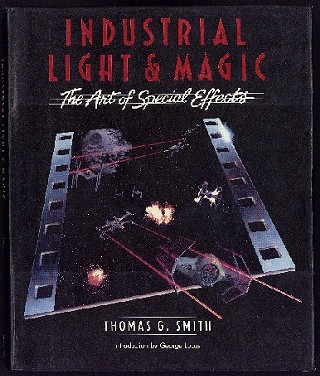 With the acquisition of former Industrial Light and Magic boss Tom Smith's personal archive, the Harry Ransom Center pulled a major coup: But by inviting Smith to speak on April 19 at UT, they are bringing an innovator who worked with the architects of a generation of films – George Lucas, Steven Spielberg and Jim Henson.

Smith explained that he was looking to find a home for "my office library and papers from 25 years of work in feature films. I was familiar with the Harry Ransom Center having used it while making documentaries. They are one of the best I dealt with so they were the first I contacted."

The acquisition is as unique and broad as Smith’s career. After taking a class in film production at Northwestern University, a Fulbright Scholarship took him to France to study film for a year. After a three year stint in the Air Force officer program, he headed back behind the lens. He told me by email, "I felt I didn’t have a chance in Hollywood but I knew someone working for Encyclopaedia Britannica Films near Chicago and got an offer to work as a writer."

That quickly parlayed into a decade making 16mm educational shorts, and he managed a transfer to their Hollywood office. Smith recalled, "I had the opportunity to learn nearly all phases of film production: Writing, camera, directing, producing and editing. Later when I would be hired by Lucas to run his visual effects facility, I believe knowledge of these essential film crafts made me a better manager of a large creative team."

The turning point was a 1977 short called The Solar System, a documentary he made with esteemed Cal Tech astronomer Carl Sandage. Smith wrote, "While NASA had done some exploration to Mars, there was little else but telescope views. So we built models of what astronomers believed the actual planets looked like." He noted, "The real challenge was to film it so it looked real. Star Wars was not yet released and all of us were struggling with ways to shoot space objects in interesting ways. In our case we had a very small 16mm film budget but we had a team of dedicated craftsmen and women who worked on this."

Many of the people involved in this project went on to work for Lucas and Spielberg, and Smith believes it was that connection that lead to him being hired to lead ILM in 1979. "George was interested in hands-on filmmaking," he wrote. "There were even a few occasions when he came in and ran a camera. He had used the same 16mm cameras I had used. He appreciated the fact that I was not simply an executive running his shop; an empty suit."

For Smith, his job at ILM was not about handling effects shots or building models, but putting the pieces together to let his staff work their magic. "I was simply the ringmaster," he explained, "but I didn’t have to go in the cage with the lions."

However, there’s a little bit of modesty there: When he came on-board, ILM was basically just the effects workshop for The Empire Strikes Back. Ninety employees were working over fifty hours a week in what Lucasfilm’s other divisions called "Animal House, because it looked like chaos with workers in rough outfits doing the sometimes grimy work of filming on dusty stages." This was actually the second ILM: The original, featuring such future giants of FX as designer Joe Johnston and model maker Dennis Murren, closed after the first Star Wars film, but when that became a massive success Lucas opened a new. Smith recalled, "When Lucas hired me, the first thing he said was that he didn’t want to close down after Empire Strikes Back. He told me I’d have to find outside work to keep ILM running till he needed it again. He also added that it had to stand alone; he would not subsidize it. He made it clear if we couldn’t turn a profit to survive, he’d close it up."

Empire was paying all the early bills, Smith wrote, "But there was no accounting system where the money was going and what each department was costing. That was my first job after Empire, in order to make it a business." Lucas was executive producing a little flick called Raiders of the Lost Ark for his friend Steven Spielberg over at Paramount: That connection helped secure the gig, but "it was strictly contractual and if we went over budget we’d get no extra money."

After that, the external clients came flooding in. First, Paramount brought Disney on-board with their co-production Dragonslayer. Ironically, this lead to ILM being in competition with itself (and not for the last time): The Disney fantasy went head-to-head with the whip-cracking archaeologist Indiana Jones, and lost. As Paramount looked for more screens for Raiders, it was the dragons that lost the multiplex battle. Smith wrote, "The effects work in Dragonslayer was some of our best work. Too bad the film wasn’t more popular. It couldn’t compare with Raiders as an action film. It was just that the visual effects were stunning." Then came a heavy-hitting trifecta – Star Trek II: The Wrath of Khan, Poltergeist and E.T., which allowed Smith to build the company “so when Lucas came in with Return of the Jedi, we were a well functioning machine.”

There are many landmarks in ILM’s history, but the most significant could be how it brought FX specialists out of the shadows. Except for a handful of names, like Douglas Trumbull, Willis O’Brien and Ray Harryhausen, they were hidden, out of sight and out of the credits. Smith explained, "Years ago, the studios didn’t want the audience to know much about VFX. They often thought of them as 'cheats,' putting in mountains that weren’t there, adding a ceiling to a large set etc." Now such cheats are handled through digital effects, and directors use them to clean up shots in the most unexpected of places. Years after leaving ILM, Smith was visual effects producer on the 2003 civil war epic Gods and Generals. Even though they were filming in open fields, he recalled "there was often no way to film without including a distant highway, power poles and barbed wire fences; all things that didn’t exist then. There was even the occasional Styrofoam cup on the ground in a shot we wanted to use. All this had to be cleaned up. So on top of all the additions we were making to this Civil War epic, we made as many subtractions that the audience wouldn’t suspect."

Yet for all the technological achievements during his career, what Smith is clearly proudest of is how FX is taken more seriously as an art and a craft than when he first entered the field. He wrote, "There were lots of visual effects in Gone With The Wind but no one talked about them and the craftsmen who did them had their names tucked deep inside the film’s credits if credited at all. Now there are visual effects fans who read all they can about it and look for familiar names in the credits. As ‘Visual Effects Producer’ my credit has been on the front of seven feature films. This would never have happened in the 1930s and 1940s."

ILM is only one thin sliver of Smith's career, so expect his time creating 3D rides for Disney and keeping the Muppet legacy alive to come up at his Q&A on Thursday. However, his visit comes just as those popcorn blockbusters whose visual effects he oversaw are starting to enter the classic canon. Starting in May, the Alamo Drafthouse will be launching its Summer of 1982 season, highlighting the 30th anniversary of what they call the greatest Summer ever. On the list are three films that depended on ILM's magic: E.T., Poltergeist and Star Trek II: The Wrath of Khan. So how does Smith feel about that period in movie making history now? "I cannot be objective," he wrote. "I consider 1980 to 1985 to be vintage years for action films."