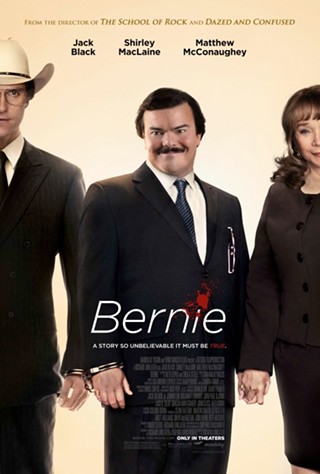 Plans are afoot to roll out a violet carpet for Violet Crown's special Austin Film Society sponsored sneak of Bernie on Thursday, April 26.

In attendance at the screening and following bash will be director Richard Linklater, star Matthew McConaughey, and co-writer Skip Hollandsworth. Hollandsworth first chronicled the true-life tale of a small-town conman (played by Jack Black) in a Texas Monthly article.

Tickets go on sale this Monday (4/16), 10am, for Austin Film Society members – a steep $100, yes, but that covers the movie, after-party, food and bevvies (including Lambert's BBQ), and validated parking. Any remaining tickets will go on sale to the general public on Friday, April 20, 10am. Further incentive to just on and buy in to an AFS membership, doncha think?

Bonus: The premiere benefits the Texas Filmmakers' Production Fund, which helps pave the way for future generations of violet-carpet-walking filmmakers.

Bernie opens in Austin, New York, and L.A. on April 27. Keep your eyes open for the Chronicle's interview with Linklater and McConaughey when the issue hits stands April 26. In the meantime, sate yourself with a look back at our Bernie SXSW red carpet roundup and post-film report.