Harry Ransom Heads to a Galaxy Far, Far Away 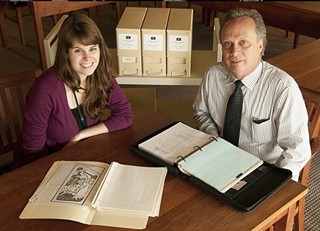 Student volunteer Carly Dearborn and Ransom Center Curator of Film Steve Wilson with materials from the Tom Smith collection (and, yes, that's a storyboard from 'Raiders of the Lost Ark' on the table) (Photo by Pete Smith.)

The Harry Ransom Center has made some major cinematic acquisitions, but now it heads to a galaxy far, far away with the archives of visual effects guru Thomas G. Smith, a key figure in creating the look of the Star Wars universe.

The HRC has acquired 22 boxes from Smith, who headed up George Lucas' industry-shaking Industrial Light and Magic from 1980 to 1986. He will be visiting the UT campus on April 19, and he'll be fitting a special evening event at Studio 6A in the Jesse H. Jones Communications Building into his trip.

Smith's resume is loaded with 80s cinematic touchstones – Raiders of the Lost Ark, Star Wars: Return of the Jedi, ET: The Extraterrestrial, Poltergeist Star Trek II: The Wrath of Khan and Star Trek III: The Search for Spock. However, before that he had a sterling career making around 80 educational movies for Encyclopaedia Britannica Educational Corporation, PBS and more. The HRC's curator of films Steve Wilson wrote, "Tom Smith's collection will be of tremendous interest to students and scholars studying special effects in film and its impact on our culture. His work and the films he helped create will be studied for generations to come, and we're grateful for this generous and important gift."

The collection covers 1979 to 2003, and includes a selection of film originals and rarities, such as storyboards from Return of the Jedi and Raiders of the Lost Ark and a hand-annotated copy of the script for Dick Tracy (the hand in question belonged to Warren Beatty.) After being cataloged, it will go alongside such other major movie acquisitions as the David O. Selznick collection and the Robert De Niro archive.