Seems like the Alamo Drafthouse will be listening to the lullaby of Broadway: The local uberchain will be opening its first cinema in New York in 2013 – on Broadway, no less.

The long-awaited announcement came this afternoon: The Drafthouse will be turning the former Metro Theater at 2626 Broadway into a five-screen cinema, serving the Upper West Side.

In a statement, Alamo head honcho Tim League said that opening in the Big Apple has been a long-time priority for him. "When we discovered the availability of the historic Metro theater," he said, "we immediately knew we had found the perfect location for our new Manhattan home."

Good news for New Yorkers: The new Manhattan site will continue the long-running mix of new releases, signature programming and repertory classics, plus the food, drink and the beloved "No Talking" policy.

UPDATE: Just got off the phone with Tim League, who seemed excited about this latest expansion. "I really like the Upper West Side," he said. "When Karrie [League] and I go to New York, that's where we stay."

Much like the planned Alamo Drafthouse in San Francisco's New Mission Theater, the Metro is a veteran of the gloden age of picture house: Sadly, like the New Mission, it has fallen on tough times. Opening in 1933 as the Midtown, the Art Deco edifice has been a first-run cinema before becoming an art house institution in the 1950s: Then there was the inevitable brief period as an (a-hem) adult theater in the 1970s before returning to its first-run roots in the 1980s (read a great potted history over at nyc-architecture.com.) The venue has been empty since 2004, and according to the New York Times there were plans to turn it into either a restaurant, a furniture store or a clothier. There were discussions as recently as last May to hand it over to Wingspan Arts, a theatre program aimed at kids. However, the Drafthouse plan, with a little TLC, will return the Metro to its original purpose. "This one's a good one," said League, "I have a soft spot for the fixer-uppers."

No kidding. "The facade is in really great shape," said League but the interior, sadly, has lost all its gilded glamor, as it was gutted to make way for an Urban Outfitters that never happened. It will take a lot of work to get it finished, which is why the opening date is a suitably vague 'sometime in 2013.' "The owner is really excited that it's going to be a theater again," said League, and he's not alone. The Twitterverse has been buzzing ever since the announcement. League explained, "There's not nearly as many cinemas as there should be in Manhattan for the population."

However, it's not just people glad to see any cinema: This is the no-talking, salad-and-burger-serving, bottoms-up, grindhouse-lovin' Drafthouse, and that reputation undoubtedly precedes it. "Being a part of SXSW has been a great help for us over the years," League added, as it has created "early adopters for who we are."

That lack of screens means a lot of under-served film fans, and that will be key to the new venue's success. "There's probably no greater density of movie nerds than in New York," said League, and he'll be looking to bring in some of that talent to help with booking. The call has already gone out for applications for managers, programmers and general cinema staff over at the Drafthouse employment page.

A Big Apple outlet could also be a big boost for the fledgling Drafthouse Films. "Speaking as distributor," said League, "we are very excited to have a cinema that will be nurturing our films in Manhattan." 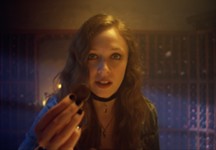