Face Off Recap: The Finale And What Came Before

So what happened to Matt? The long overdue wrap-up 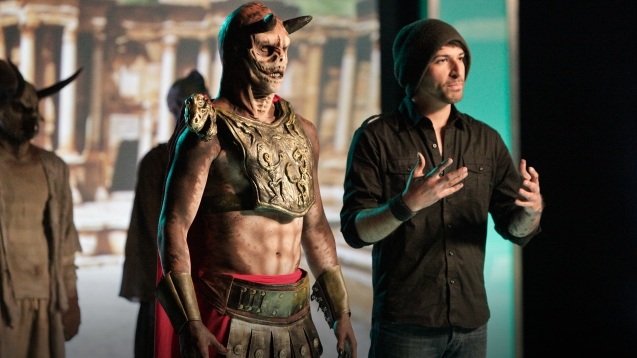 Yeah, so there was this little thing called SXSW that got in the way of any TV watching – even the ongoing chronicling of local FX maestro Matt Valentine and his adventures on SyFy's makeup challenge, Face Off. Now the series has wrapped, and we have a winner.

Entering the penultimate episode, Matt's in the final five. This is when every one gets to make their emotional plea for victory. We already had RJ's sales pitch at the beginning of the season, that he's doing this for his students (even though he wants to get out of teaching high school and go pro again.) Ian wants out of debt; Sue wants to make her fiance proud; Rayce plans a better living for his family; And Matt wants to expand his business, Global Fear Enterprises Now the real problem is that this is pretty level playing field. Admittedly, the Austin crowd is going to pull for the local boy, but this isn't season one, where Conor McCullagh was head and shoulders above everyone else. This time, everyone has flaws and everyone has areas in which the excel, and it's going to be a tough call all the way to the finale.

The penultimate challenge harks back to a theme the judges have loved this season: Chimeras. First we had the fish fusion challenge, then the contestants had to create a jungle hybrid. This time around someone must have fallen asleep in front of a Betamax copy of Thoedore Rex because it's dinotime, and each contestant must make a half-human, half-dinosaur mixture. Ian is tempted by the Triceratops; Rayce opts instead for the duck-bill Corythosaurus; Matt's attracted by the horns of the Carnotaurus; and RJ lumps for the Velociraptor and goes for the world's worst pun. Veloci-Rapper. Geddit? Yeah. No. 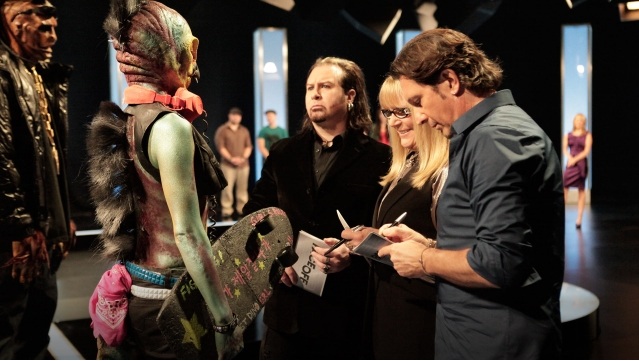 The editor gods no longer have Jerry to kick around, so instead this weak they decide to play games with Sue – making her, well, basically, look unhinged. "It's so colorful. And I'm colorful," she giggles as she selects the Tianyulong. Hey, editors? Quit trying so hard. This just isn't a dramatic bunch now, ever since Jerry and the equally surly Beki gone, so it comes down to the structure of the show. This is a double elimination, so the mantra is "go big or go home." Ambition and over-reaching are necessary, because nobody is leading the pack. Ian and Rayce have improved every episode but have had bad days; Matt has stayed out of the bottom ranks but has not swept the board; RJ has been erratic; and Sue has been responsible for brilliance and botch jobs on successive episodes. The tension is obvious, in a way that it hasn't been before.

Fortunately, the editors then get distracted by an unexpected drop-in to the lab by Cleve and Constance Hall, expert fabricators who just happen to have their own SyFy series, Monster Man, which is taking Face Off's time slot in the Summer. Coincidence? No. Personally, I would have liked to have seen Cleve get into an onstage goth clash with the mighty Glenn Hetrick in a new show called Beard Off.

Speaking of Hetrick, this should be one of the last chances for the judge's trademark bait-and-switch compliment/insult combos. However, this week there's so little for him to really hate that he's reduced to the odd raised eyebrow. I gotta say, I miss Grump Glenn. So many ill-tempered compliments, so many gloriously undercutting plaudits.

If there's a clear winner on execution, it's Rayce. Somehow he manages to completely break up the human lines of his model, especially around the neck. Ian's take on the Triceratops is kinda beach bum-esque, a Carnival Cruise of Dr. Moreau. Matt falls down a little on the paintwork on his god emperor carnivore – stressing the fossil more than the living beast but his Imperius Rex is a great concept. RJ's joke works better than expected, but it's still a little one-note. Sue's hipstersaurus is cute, and that's divisive in these circumstances. 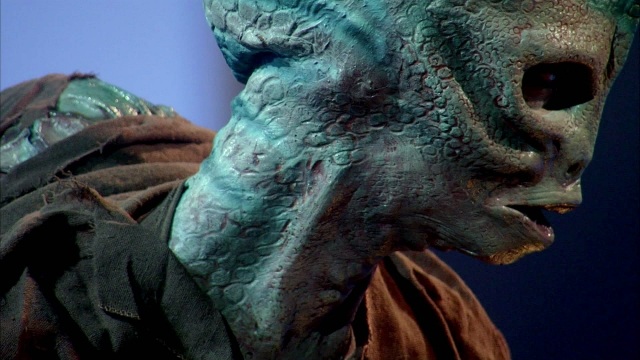 So who goes home? From a technical viewpoint, this is as close a race as this show has ever seen. No-one fails, and considering what this show really shows is the ability of artists to create a test makeup, then what they manage is astonishing. The judges even have to reframe the show, so it's not two people being rejected but three people moving on. Even so, It's pretty clear which way this is going. Hetrick hates Sue's dinogirl-power shtick, while Ve Neill wanted more dinosaur in Matt's design. That said, both Hetrick and Neill are pretty gushy about his work so far, and what he'll achieve in future. 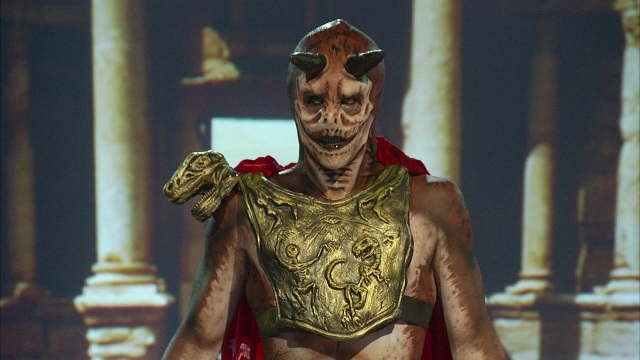 Now this is a double test. The show has always been about being camera-ready, and has never really been about stage makeup. Moreover, it has always been about individual skills, not testing the artists' ability to lead a team, and this is where RJ is falling down. His vision of an alchemist and Gaia fighting over a Phoenix is interesting, but he just won't tell his team what to do. That allows time for Beki to play to form and undercut Athena's work, and that's not what a good creative director would allow.

What he does well is to implement as many different techniques as possible into his ensemble. He even has Jerry telling him that he's got it in the bag – which is odd, considering Jerry is on team Rayce. Oh, Jerry, you're crazy. And possibly an ass.

Sadly for Jerry, Rayce has clear a vision, of a battle between light and dark, and he gets everyone working together as a team. Over on Team Ian, the season's youngest competitor has to overcome dual problems: First that he is the least forceful artist on the block and, second, that he has to create a horror vibe – which he hates. It's a no-brainer that he'll bring Matt in to help build his demon and its pet hell hounds, so that shows some good talent spotting. Finally, he also steps up to the plate as a team leader, and gives Rayce some steep competition. 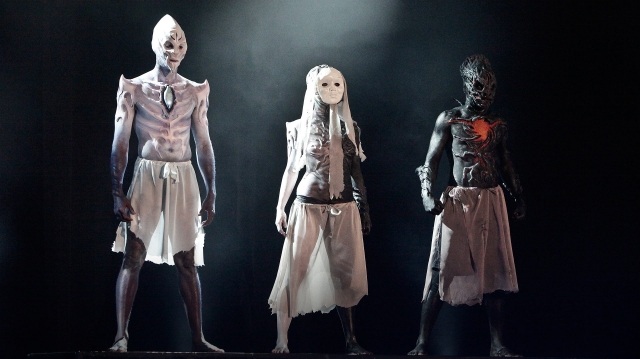 The winning look: Rayce kills it on concept yet again (Photo courtesy of SyFy)

Even so, it turns out that Jerry could not have been more wrong. Rayce's decision to go with a grey scale really pays off because, even with three days to work on three makeups, everyone is a little let down by their paint jobs. However, Rayce yet again has a split on his latex – the same technical problem he had back in the phobia challenge earlier in the season (the fact that the judges overlook that the makeup cannot survive the dance routine speaks volumes to the strength of his concepts.) And I'll say it: The best reviewed part of Ian's work is the bleached-out color scheme, which feels very Matt. Just sayin'. As for RJ, Neill may like his whimsy, but I'm with Hetrick (yeah, I said it) in thinking there's too much whimsy in his work. So it's no shocker that, for all the technical issues, it's Rayce who walks away with the win.

Should Matt have been in the final three? I'd have to say yes, and I think he should have taken RJ's place. Both had moments of excellence and well-deserved wins: But look across the season. At his worst, Matt was solid. RJ's worst – the shark lawyer flop, the razor-embedded doctor, and the frankly poor alien – were bad. I'll say it, I think Hetrick was right about the dino-rapper – and this is coming from someone who thought RJ should have won the Burtonesque challenge.

But the end of the series is all Rayce, and it's hard to say it is not well-deserved. After all, he's not actually an FX guy by training, but a tattoo artist. Rarely less than solid, regularly excellent, he's the kind of winner you really want to see come out of a show like this.