'Funny' for the Ages 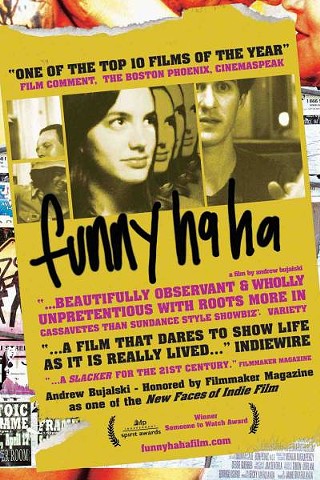 This is inevitable, the cheek-chewing introspection that comes with the anniversary of any beloved cultural product so simpatico with your own sensibility and experience it feels like shared DNA. Ah, but we have come to praise Funny Ha Ha, and not to wonder what the hell we've been doing with our lives the last ten years.

Instead, we can happily rattle off what Andrew Bujalski has been doing since he wrote here in Austin the script for his funny and aching first film, about a new college graduate named Marnie (Kate Dollenmeyer) drifting between temp jobs and the just-as-temporary attentions of a handful of guys; what we still recall is how startling and true and rare-bird the film felt on first (and second, and third) viewing as a portrait of life as a work-in-progress, with no canned resolutions or easy solutions in sight.

He shot it in his native Boston in 2002, then, in a monument to microcinema-hustle (aided by a couple of lucky breaks), slowly got the film seen. (We spoke with him in 2003 about the not-yet-commonplace trend of DIY distribution.) There were festival berths and accolades and bigger venues. (Former Chronicle contributor Spencer Parsons, who once programmed Funny Ha Ha as part of the now-defunct Blue Screen series he cofounded with Kyle Henry, spoke with Bujalski in 2005 about the film’s almost improbable staying power on the movie theatre circuit.) More movies followed – 2005’s Mutual Appreciation and 2009’s Beeswax – as did a move back to Austin; a wife, a kid. His latest feature, Computer Chess, went into production locally in late summer 2011.

A 10th anniversary screening this Sunday, March 25, 7pm, at the Alamo Ritz, will premiere a newly struck 35mm print that Bujalski swears will be “the handsomest presentation this movie has ever had.”

He’ll also be there at the screening, “to show my face,” he says, and “for some reason, continue to be held accountable for things that I thought were good ideas when I was in my 20s.” There’s comfort, then, in knowing we’re not alone in the cheek-chewing.

Tickets are on sale at the Alamo Drafthouse website.