An interview with 'Black Pond's directors 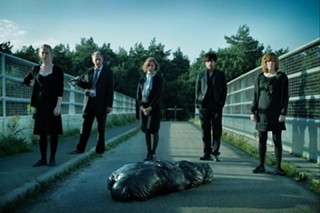 What's up with contemporary British cinema of late? Alongside with the likes of Simon Rumley, Ben Wheatley, and Nick Whitfield, you can add Tom Kingsley and Will Sharpe to growing a list of indie UK filmmakers devising a whole new form of cinematic storytelling. Call it the nouvelle weird.

Black Pond, Kingsley and Sharpe's feature debut, is, like Wheatley's masterpiece(s) Down Terrace and Kill List, ostensibly about the banal, daily lives of small town, suburban-rural outsiders confronted with or complicit in the fragmentation of said banalities. Lives of quiet, anxious desperation are transformed by inexplicable, often violent events, and the ordinarily absurd elements of the everyday are suddenly reflected through the camera obscura of leering mortality. To paraphrase Joe Jackson, in every dream home, a nightmare; the skull beneath our skin is forever set in an unknowable rictus grin: Death finds Life fucking hilarious indeed.

Black Pond, however many surface similarities it appears to have with Down Terrace (or even Chris Morris's Four Lions), is unique. For one thing, it's being called a comedy, but the humor here is pitched to the sublimely grave and the story, concerning Tom Thompson, a middle aged man (terrifically played with just the right combination of existential ennui and clueless narcissism by revered British comic Chris Langham) who befriends the mysterious Blake (Colin Hurley), an Asbergers-afflicted enigma who later expires at Thompson's dinner table.

Clearly, then, this is not your average British comedy of manners, although as we are introduced to the apparently typical Thompson family, it increasingly becomes clear that a death at dinner is altogether apropos.

"It's not actually based on a real incident," Sharpe assures. "But the strongest reference point for Tom Thompson is from [UK television program] The Thick of It which was done by Armando Iannucci, who also did the film In the Loop. Chris [Langham] played a kind of hapless M.P. in the show and ended up being unanimously praised as the best thing about it. So one of the ways that we tried to understand the character of Tom Thompson was by asking what this bumbling, tired, middle-aged guy, what's his family like? So that was the jumping off point for Black Pond."

As a film that mixes live action, talking head faux flashbacks, animation, and characters so deadpan and emotionally discombobulated that they might as well be existing in some sort of parallel universe, Black Pond also includes what might be the single most unnerving dream sequence since Salvador Dali was unleashed on Ingrid Bergman in Alfred Hitchcock's Spellbound.

"It has to be said that one lady in the Q&A the other night didn't like it," says Sharpe, "But the idea behind it was that it should be like a dream for the audience more than the character. It's not 'Here's the character having a dream,' it's 'This is you, the audience actually doing the dreaming.' We wanted to have the audience tap into that place where, after you have a particularly vivid dream you wake up and feel disoriented all day long."

So is there some sort of renaissance going on in UK indie cinema? Is the nouvelle weird just a phase or indicative of something greater?

Sharpe: "Ben Wheatley was very helpful to us in that he made Down Terrace in a very similar way, with very little money, he just went out and shot it, which was greatly encouraging to us. It all comes down to, I think, the fact that if you want to shoot a film these days, you can do a professional job of it with not much money, which hasn't been the case before. We only had about $40,000 to make this film and I think that's catching on with young filmmakers in the U.K. I'm not sure it's really a movement, but certainly there are a number of new directors doing some really amazing stuff that hasn't been tried before."