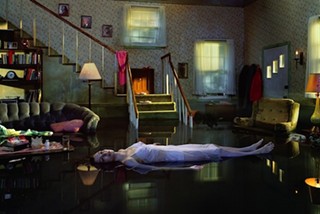 We were unfamiliar with the work of photographer Gregory Crewdson before going into this screening. Now, happily, we've seen the light (and the darkness) of this singular artist's transformative work and are ready to take up second and third day jobs in order to own purchase of his otherworldly, existentially tormented photographs.

Director Ben Shapiro's documentary Gregory Crewdson: Brief Encounter is, if anything, too brief. That's not a knock on Shapiro, only an admission of our ignorance going in: We want to know more, see everything, get closer to the hyper-realististic, ultra-spectral imaginary fragments of "real life" that Crewdson captures with his lens (and film/lighting crews of 60 or more people).

A Brooklynite who found his true artistic calling amidst the ramshackle-proud townships of a economically crumbling Massachusetts (Pittsfield, for example), Crewdson's intricately staged photographs could be kin to Cindy Sherman or Edward Hopper's equally affecting visual scenarios, but the artist himself states a childhood visit to a Diane Arbus exhibit, via his father who had reasons his son still puzzles over, as the genuine impetus.

Whatever the catalyst, Crewdson's techniques, adapted from cinema for single-image photography, involve logistically complex shoots using non-professional talent and hauntingly moribund settings: near-empty parking lots lit by treacherous pools of light, begrimed windows glimpsed through private doorways, and always the photographs focal and imaginative point, the people. Sometimes they appear to be lost, almost always forlorn, disquieting in their humble everyday ordinariness yet freighted with small menace, like a still frame from moments before the hysterical shower sequence in Hitchcock's Psycho, or at any randomly-chosen point in David Lynch's Blue Velvet.

All of this, we learn from Shapiro's engrossing documentary, is backboned by a fierce, unwavering vision and a distillation of everything Crewdson sees, hears, and feels during his location scouting sojourns to just over the wrong side of the tracks. It's a terrible, lovely, uncanny sort of place, a real-world Twilight Zone of Americana made all the more real by nature of its fakery. (Screens Sunday, 5pm, Alamo Slaughter, Wednesday, 4pm, Alamo Slaughter, Saturday, 11:30, Vimeo Theater)