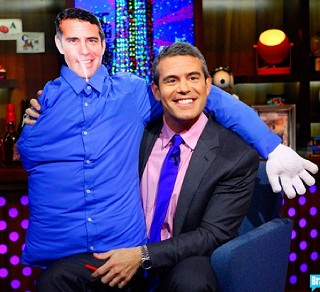 Andy Cohen and Pillow Andy Cohen on Watch What Happens Live. (by BravoTV.com)

Hsia explained that she took the working definition of transmedia from Tim Kring, the creator of the erstwhile epic network drama Heroes; simply put, “transmedia” is the extension of a show’s narrative across multiple platforms, including social media and the Internet. “Bravo came to transmedia out of desperation,” said Hsia. “I was on the digital side and would talk to Tom and Andy on the production side about getting meaningful Top Chef content on BravoTV.com.” Serwatka explained that Top Chef was a no-brainer to test out the transmedia approach with Last Chance Kitchen in that Top Chef is a flagship show and has an easily identifiable stake in giving eliminated cheftestants a chance to re-enter the competition.

Viles explained that there were three important aspects to this transmedia approach: Last Chance Kitchen gave fans another opportunity to watch the chefs compete from their laptops or mobile devices. Extending the fan favorite competition throughout the entire season, and not just on the night an episode premiered, allowed fans to rally around their favorite chef. Third, and most important, is the social media piece, which allowed the chefs to interact with their fans. For Colicchio, Last Chance Kitchen was a chance for a chef to correct the fallout of having a bad day.

Ultimately, the transmedia platform seems to have worked: Hsia recalled that she had hoped for one million streams for Last Chance Kitchen, but all told, the web series received eight million streams, the most of any of NBC Universal’s online content. What’s more, the episode of Top Chef: Texas in which the winner of Last Chance Kitchen was revealed received the highest ratings of the season.

How else might you measure the effects of a television show with such a vibrant transmedia approach? “Try getting a table at Uchiko tonight,” Colicchio quipped.