SXSW Film: The Cabin in the Woods Q&A

Joss Whedon and Drew Goddard premiere of 'Cabin in the Woods' 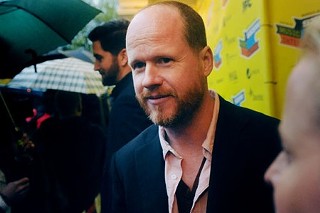 Drew Goddard: This is the first time I saw the movie with an audience. I’m trying really hard not to cry.

Joss Whedon: I haven’t seen it in a couple of years, it really holds up.

The movie was shot in 2009 but shelved until now. One audience member asked why.

Richard Jenkins: Because it stinks.
JW: We agreed we weren’t going to divulge that. The reason is that MGM went bankrupt and this got shelved along with James Bond and The Hobbit.

Did you intend to make the last horror movie of all time?
JW: Yes, that’s it for horror, so hope you like rom-coms because that’s what you’re getting.

A lot has happened since you made this movie; how have you changed professionally?
Bradley Whitford: (gesturing to himself and Jenkins) They won’t work with us anymore.
RJ: That started halfway through the film.
DG: I’m just so much older.
JW: I don’t think anything is different. I had hair and I was taller than Drew. We’ve both been going on with our lives, but living for this event.

This is kind of a departure for you, Bradley and Richard. What drew you to the project?
BW: I’d known Joss for a while, I’m a big fan, so that was a big draw. The script was also a big draw. I really wanted to work with Richard Jenkins. I didn’t realize until I got to Vancouver that I’d confused him with Richard Benjamin.
RJ: I wanted to work with her (snuggles Connolly). My agent said, you have to read this, and the next day I said I have to do it. It’s an incredible script.

So much of the stuff we watch is the same, it’s banal. When something breaks the mold but is playing with the ideas everyone else is having, you have to wonder, how do you make the jump?
BW: You guys wrote this really quickly, right? Checked into a hotel, saw some scary monsters. There’s a consciousness there, of being written fast in a good way. It gets beneath the Robert McKee in us all.
JW: It was written fast, and there was no backtracking, no second guessing. We wrote for three days, and each day was a different act. We each had a separate room and were responsible for writing 15 pages each per day. And this movie is very clearly on one level about being a writer; Bradley and Richard are in a way playing us, manipulating people. You write what you know.

Did you make this partially because you were sick of archetypes?
DG: To some extent, but it came from a place of love. We just did it because we wanted to entertain each other, and pray to god that someone would want to make it. If nothing had come of it, that would have been fine because we love it.
JW: We love the archetypes, but they can become sullied and overused. They need to be honored … and then killed.

What was the atmosphere like on set?
BW: A lot of hostility and bitterness, Drew’s very angry. It was a really fun set, a loose set. Drew is a director who wants the best idea to win.
Anna Hutchison: Drew’s got lots of energy so it was heaps of fun.
BW: (to Hutchison) That is the fakest Australian accent!
AH: It’s New Zealand!

How can everybody not talk about a movie this awesome?
JW: “Awesome” is acceptable. As is “timeless classic.” There is a difference between talking and tweeting. Tell a loved one, then take them to see it -- in the evening, not at matinee prices.