Burtonesque (adj): Appertaining to the work and design ethos of Tim Burton. 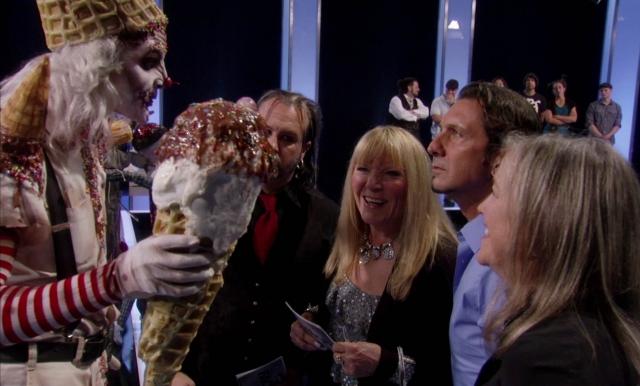 Yup, There are few film makers with such an obvious and unmistakable look and feel as Tim Burton. Look at the other directors who have become adjectives. Hitchcock had his trickiness: Spielberg has his gooey center: But Burton … you just know it when you see it.

So it's a little bit of a no-brainer to ask the Face Off competitors to create something inspired by Mr. Bonham-Carter. Now, obviously, they're not going to get Burton dropping by to give his opinion, but with regular judge Ve Neill still polishing her Oscars for Beetlejuice and Ed Wood, and Catherine O'Hara (A Nightmare Before Christmas, Frankenweenie) as the guest, they're in safe territory.

Now the difference here is between inspiration and emulation, because this cannot just be stock goth. Matt is a huge Burton fan: I remember visiting one of his early workshops, and he had a mural of his signature character, Mr Creep, at the reins of Santa's slay sleigh from The Nightmare Before Christmas. It's in his artistic DNA, and his idea for a depraved ice cream vendor is as much Willie Wonka and the Penguin as it is his own trademark fun house noir stylings. Beki instead creates an unseen character from Alice in Wonderland, the Mad Hatter's confectioner girlfriend who has been driven mad by rejection and mercury fumes. But Ian seems to get lost in the original instruction when Host McKenzie Westmore refers to Edward Scissorhands: His gaunt and haunted plumber has a little too much Johnny Depp in the design, and it's there a little too obviously. 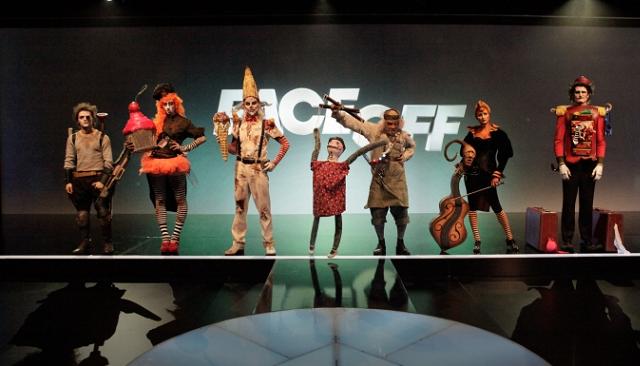 The line-up, the disasters and the victors on the Burtonesque episode of Face Off (Photo courtesy of SyFy)

It all comes down to props and tricks. So far, the cast has stayed clear of add-ons and gewgaws, and concentrated on the make-up. That's lead to what I call monster pants syndrome: The top half is great, a completed concept, while the bottom is whatever they could grab from the pants shelf. The worst example of that so far may have been Rayce's contribution to last week's challenge: A scarlet, eyeless beast who shops for jeans at The Gap. This week, it's all about the whole concept. Beki gets fixated on building an enormous cupcake, while Matt's waffle cones mean a strict rotation of mix foam, pour, dry, repeat. Sue and Rayce are the boldest examples this week. Sue's twisted toymaker is Frankenstein's puppeteer, playing with a child-sized marionette, while Rayce decides to build a human-faced cello to go with his cello-faced human.

It does make sense to spend more time on the overall concept. Burton's makeup jobs and appliances are distinctive but subtle, so an integrated design will win more points. That's where RJ really steps up this week. His idea for a bellhop that is slowly merging with his hotel is genius, camera ready, and filled with witticism (the bell/hat combo that really tings is inspired.) It's an over-the-top costume complimenting a makeup job that accentuates the model's faces. And, while we're talking models full marks to Langdon who sells the piece and the character. 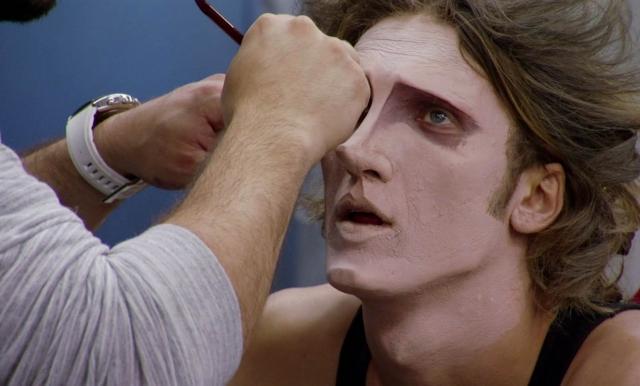 The unsung star of Face Off: Langdon the model (Photo courtesy of SyFy)

A Burton makeup job can be minimalist, but there's a right way and a wrong way to do it. Or, as we'll call it here, the Rayce way and the Beki way. The way he blends the cello's F-hole into the facial makeup is inspired, but her dependence on some stripy tights to seal the look is just lazy. Same with the props: Matt's waffle cone and RJ's drawers full of purloined undergarments expand the character, but Sue's puppet is a clumsy disaster. After the debacle of the spider legs from episode five, it's a shocker that she would risk anything with spindly limbs, and the result drags down a character who has no Burtonesque features. Cue the best/worst Hetrickism of the week [Hetrickism (Noun): Something brilliantly nasty said by Glenn Hetrick]: "The build became a ballet of idiocy." 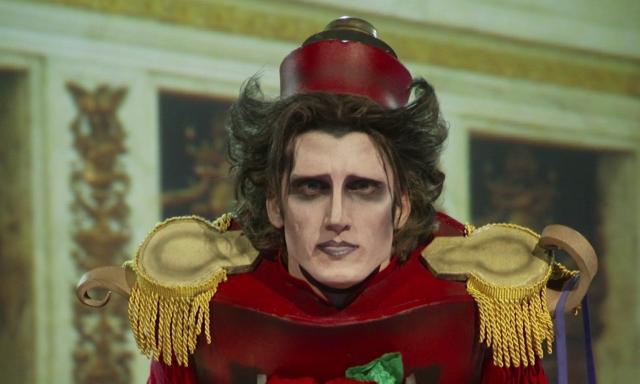 This is a week where I genuinely do not envy the judges. The divide between the top three and the bottom three is obvious, but the top three are all of a very similar caliber. Matt, as the master of mean points out, hits a perfect midpoint between himself and Burton. RJ's bellhop is charming, and Rayce's cellist is winningly tragic

Beki's exit may have surprised a few people, but it was either her or Sue, and at least Sue tried. Ian went too safe, and it's a big question whether he will survive the exit of his quasi-mentor Jerry last week. At this point, unless there is a huge disaster next week, it seems impossible both of them will make it to the finale in episode 10. 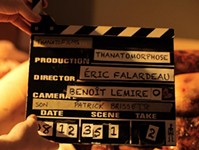 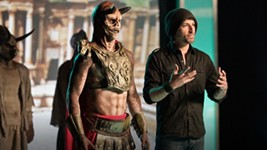 Face Off Recap: The Finale And What Came Before
So what happened to Matt? The long overdue wrap-up