Face Off Recap: Loving the Alien 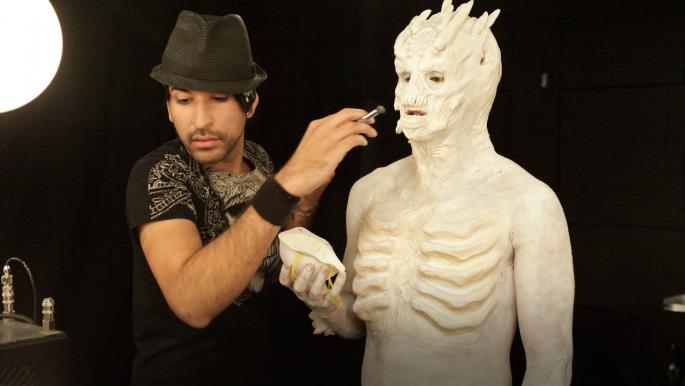 Seven weeks in to season two of SyFy's FX competition, and we're getting to know and like the contestants. Unfortunately, this week Jerry is back in his duly edited role as series schmuck.

The episode begins as Tara, Rayce, RJ and Ian sit around while he kvetches about how the judges weren't tough enough on Sue's winning sculpt from last week. Meanwhile Matt and Sue are depicted as the last of their faction. That leaves Beki out on her own, although she mounts a to-camera defense of Sue – well, she points out that Jerry hasn't won an episode yet and so scarcely has the leeway to start complaining about other people's work.

Now here's the issue. If the editors are depicting Jerry accurately, then he's a jack-ass. If they're selectively editing him to look much worse than everyone else, then they've succeeded far too well. To borrow some wrestling terminology, Jerry has heat, but not good heat. 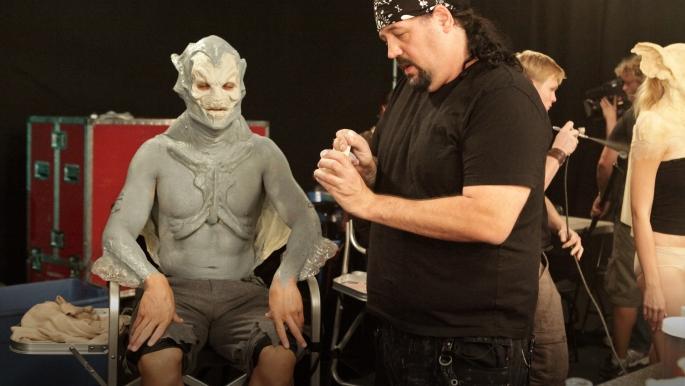 Farewell, Jerry: You made the show more interesting, and you gave the editors someone to make look cartoonishly awful (Photo Courtesy of SyFy)

And here's the real problem: Jerry is a ringer. I mean, let's look at the guy's IMDB page. He's also the founder of SOTA Toys. Nothing against that firm: I own some of their work, including their wonderful Cthulhu, but they are an established entity. That means Jerry was no beginner. He always talked about how much more experienced he was than everyone else there, but if the show is about giving beginners a break then I don't see why he was there. (I'll also note that, much as I like their work, Heather and Tara come in with pretty serious resumes too.)

Rant over. Now back to the show.

Now this is an interesting challenge: The competitors will effectively be pitching their design to Patrick Tatopoulos. Yes, the same Patrick Tatoupolos who is judging the show. He gets to pimp the (wholly redundant) Total Recall reboot (after all, Ve Neill and Glenn Hetrick get to promote their work for teen-friendly Freeper fantasy The Hunger Games and Lady Gaga respectively every week.) Then he explains the challenge: Turn one of his concept designs into a real costume.

How does this compare to last season's alien challenge? Then the competitors had to create a convincing xenomorph, capable of surviving the rigors of a real Earth-like planet. It was fascinating, but this one is more relevant to the industry. Turning someone else's concept design into something screen-ready is what a lot of grunt FX workers will start their career doing. The nice thing is that Tatopoulos seems to really care. His advice to the contestants seems genuinely useful and enthusiastic. 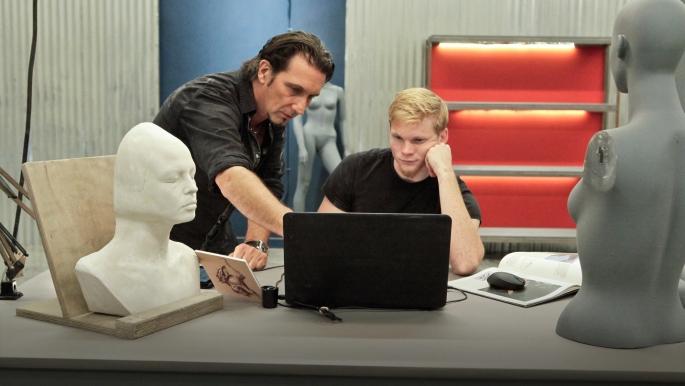 Everyone is having mold troubles. Tara's arm extensions break in the mold, then RJ's mold cracks. Both have to dump their plans to use foam and settle on the less flexible polyfoam, and then life gets even worse for Tara - her mold hits the floor and it's goodbye to her arm extensions. It's not much better for Ian, whose bat ears do not fill correctly and are all rips, tears and thin spots.

Honestly, this is not a good week, and even the sudden announcement of Geordie LaForge himself, SXSWedu keynote speaker LeVar Burton, as a guest judge can redeem it. Sue's bat-girl looks like a first season Star Trek: The Next Generation sculpt (and I say that as a die-hard Deep Space Nine fan) while Beki creates some kind of drippy space dominatrix. The winner would have been Rayce if, and only if, he had taken his design all the way to the floor. Instead, his innovative, eyeless, scarlet beast seems to be wearing jeans. As for RJ, he delivers on the silhouette, but turning the lights on does him no favors. The strange crab/bat arm extensions are a wholesale mess, and it's slightly baffling that the judges mostly ignore that in favor of adoring the headpiece. 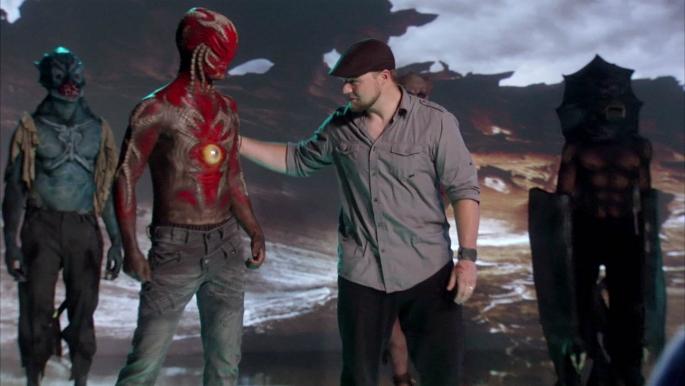 When the double elimination is announced, it's no surprise that it's Tara and Jerry. She pulls so many design components out that Tatopoulos' original concept disappears, while Jerry's pissy attitude when faced with criticism would get him fired from the job anyway. It's also no shock that Ian gets his second win, having salvaged his bat beast by turning the tears and rips into wounds and scar.

Let's cut to the chase: This week is the tipping point. With a double elimination, and the eight going down to six, the show has gone from a split field of runners and riders to serious contenders only. Unlike last season, when Conor McCullagh was the clear leader throughout, there is no single top contender. Everyone has had good and bad weeks. Ian may be on a roll, and the judges loves his creativity, but he has real confidence issues. In his most redemptive moments, Jerry has served as his mentor, but Jerry's gone. Sue never finished her hands, Beki has yet to impress me, RJ is too erratic and, as for the local favorite, Matt is going to have to break out of the pack soon to take the top slot.