Face Off Recap: The Subtle Blade

There have been a lot of big stunt challenges in this season of Face Off, and a lack of guest judges with make-up credits on IMDB. Breaking that run this week, it's a pair of subtle challenges and two big names: Greg Cannom and Kim Greene. 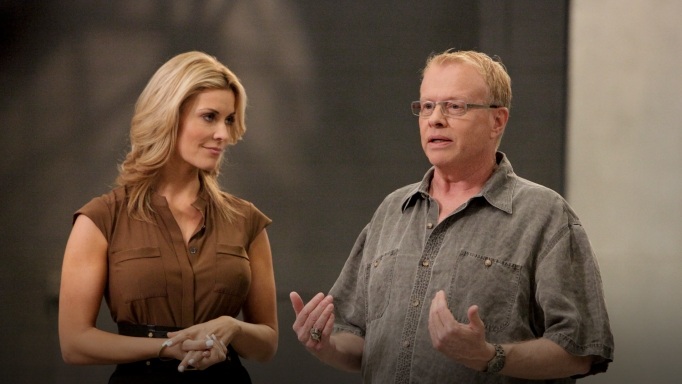 Oscar winner Greg Cannom gives out some genuinely useful assistance on how to age a model. Hey, I thought it was interesting. (Photo courtesy of SyFy)

Now it's no secret that, round these parts, we like our big practical effects, but part of the pleasure of Face Off is that it really shows the whole gamut of SFX skills, from big prostheses to more subtle effects, achieved solely with skin pigments and delicate touches. Greene has managed some impressive work (she has been Drew Barrymore's makeup artist of choice for over a decade, and even made Lindsay Lohan look, er, camera ready for Herbie: Fully Loaded), while Cannom is the go-to-guy for aging effects (whatever problems there are with The Curious Case of Benjamin Button, they cannot be blamed on his Oscar-winning make-up.)

But as much as this show is about respecting the profession of practical make-up artists, this is also about drama, and the contestants are still reeling from losing the ever-perky Athena last week. There was little doubt that she had great body painting skills, and as the season extras show, she was very popular with everyone (especially Austinite Matt Valentine.) But with the sudden announcement that they were being thrown straight back into the challenge, and forced into self-selecting teams of three, there was little time for mourning. And, yes, you can smell the "Oh, no, it's like sixth grade dodge ball all over again" coming off them as they get picked and scorned. 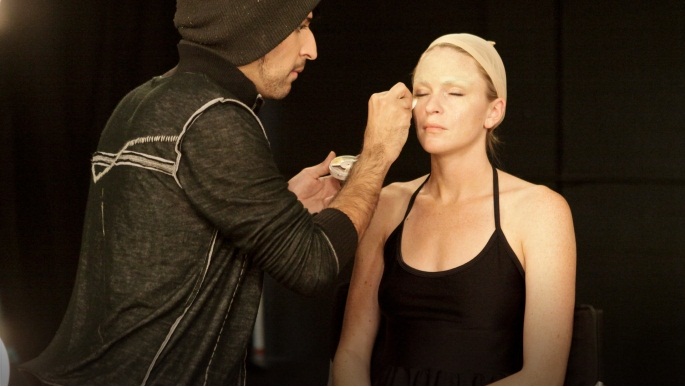 Gore no more: Matt Valentine wields a more delicate implement this week on Face Off (Photo courtesy of SyFy)

Team one: Heather, RJ and Beki. Call them team confidence, because they are definitely sure of their talents. The downside of the confidence is a certain icy infighting, as Beki repeats last week's passive-aggressive behavior towards Sue and turns it on Heather instead.

Team Two: Tara, Sue and Matt. Matt could be the key here, since his successful collaboration with Tara won episode two's underwater challenge, and he has been edited (remember, this is TV, folks) to be very close friends with Sue. That said, Tara's concern that Sue has been caught up in some drama or other every week won't shock anyone.

Team Three: Jerry, Ian and Rayce. Good for Jerry, because his partners are on a serious roll, with back-to-back wins. Plus Rayce picked up immunity in the opening foundation challenge but still seems like a team player. That's where Greene comes in, overseeing a make-under challenge to open the show. That's her forte, dressing down the gorgeous, and her explanation of the value of a good back story may be one of the best learning moments of the series. 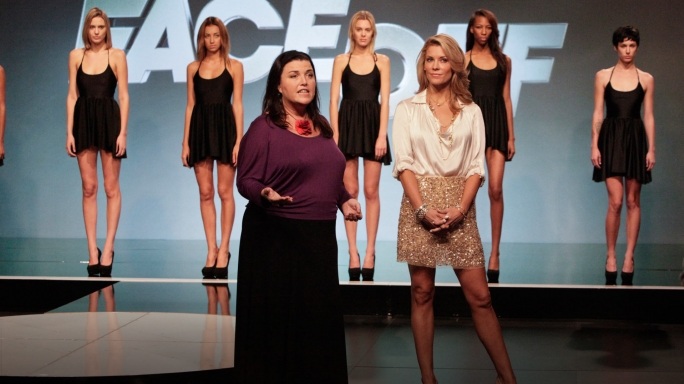 Kim Greene drops by the set of America's Next Top ... wait, what? (Photo courtesy of SyFy)

And what is the main spotlight challenge? The remaining contestants have to create matching aging makeup for a pair of twins. One is to be aged to look 75, and the other to 100. No, wait, they're really triplets! Number three comes out and this one has to be 50.

Team one gets nailed with a random fraternal triplet, which will be a tough one to fit into the aging process. Meanwhile team two is collapsing as Tara and Sue accuse each other of being less experienced. It gets worse when Tara gets bent out of shape that Matt and Sue are too good at communicating with each other.

And then the curse of the poisoned model strikes again! This time, it's RJ whose mobile mannequin has some weird allergic reaction to the makeup, and so he has to get a replacement. Sadly for him, his team's triplets aren't quads, so he gets a "looks a bit like them" substitute and time to hack and sew his face pieces for the wrong head. Meanwhile Beki tries to blend (drink!) and thin the edges of her facial pieces with acetone. This becomes another adventure in editing, as the show cuts some pretty awkward footage of Beki being mean about a potential medical condition. Thank goodness for out-takes, eh.

Ultimately, team one faceplants (pardon the pun) straight off when Beki's 50 year old looks like a rejected sculpt from Meet the Klumps. That said, RJ's darting job to make the mold fits gets a patented Glenn Hetrick bait-and-switch insult into a compliment ("Everything you're telling me seems like an excuse, but it's not, because you managed to take all those things and turn it into a successful make-up.) Heather gets a big boost by how well her model sells the look, nodding off like a truly ancient old lady.

Team two goes down the aging hippy root, trying to turn their trio of 20-something blondes into a sun-bleached teepee dweller. Unfortunately for them, their 100 year old looks 50, their 75 year old looks 49, and their 50 year old looks like she just needs a little lotion. As acid queen Ve Neill observes, they've got problems coming if they think that's what 50 looks like. However, they pull off the best progression, and that has to count. Made Man: Matt Valentine works on his triplet (Photo courtesy of SyFy)

Team three's aging mob boss is a look tied together by a well-placed mole, but talk about a hair care problem: Matt gets pummeled for using a bald cap and wig too early (the term "cone head" is used), Tara is dragged over the coals for her long white wig, but Sue gets props for going bold and bald, as well as a last-minute victory on the paint job. Actually, her centenarian actually looks like a very old Ian, which is slightly worrying.

As for Team Bottom Three, Ian's sculpt is too subtle and fails to blend (drink!) In a moment of dramatic irony after her kvetching about Heather's sculpt, Beki's mold is just misguided. In a shout-out to prior guest judge and Saturday Night Live makeup mainstay Jennifer Aspinall, Hetrick drips disdain as he comments that it looked like something for a SNL skit where they want someone to look bad.

Eh, could be worse. He could have said Mad TV.

However, even a pliant model can't save Heather and what Hetrick calls her "melting zombie" look (please someone tell me someone is recording every mean Hetrickism for posterity.) However, I have to disagree with the judges. Maybe it's just that it worked better on TV, maybe it was the model, but there was worse on display. Still, out she goes, back to Dallas.

Now, unlike last season, there's no clear front runner: And then Brea got sent home two weeks ago, it was made clear that a challenge victory is no guarantee of keeping your bed in the house.

So where does everyone else stand? Matt has two wins, but has slipped into the midcard for the last two weeks. Sue's win breaks a losing streak: She's had a lot of screen time, but prior to this week she was either safe or in the bottom of the pile. Beki's scrambled to the top of the pile a couple of times, but her immunity last week didn't stop her involvement in the eight-legged debacle with Sue. Ian and RJ were on the bottoms for week two on their awkward shark/lawyer mashup, but their lizard-bush mutant gave RJ his first win, and Ian's solo win for how he grappled with odontophobia in the night terrors challenge. Jerry has been the up-and-down kid: Immunity in episode one, bottom four in episodes two and three, and now the upper division place he obviously thought he deserved much earlier. Meanwhile it's tough times for Tara, who went from top to bottom and has stayed there for a couple of weeks now. Ya gotta wonder where this leaves Rayce, who has a pair of final fours under his belt: Next on the block, or potential dark horse winner? With a double elimination next week, this could go either way.