Face Off Recap: Venom on the Sculpting Room Floor

Malice amongst the molds on SyFy Four down, nine to go. As Face Off slowly whittles down the contestants, it sometimes seems that the only way we'll get down to the real top-tier contenders is if they unleash wild animals in the studio. Wait, they did what? Huh.

Now this week's pre-credit sequence is interesting. Are the editors messing with the cutting? First we have Tara near to tears when Glenn Hetrick calls a piece "shameful," then it's the trademark beanie of Austin's own Matt Valentine bowing as Patrick Tatoupolos calls someone's work "one of the best I've ever seen." But are those shots related, or just there to increase the drama? Oh, how you tease, editor gods …

What's clear is that this is the blow-up episode. Last season we had Jo Holland harping on about how Megan Areford consistently hung around eventual winner Conor McCullagh. There had been implications of factions, with RJ, Jeff and Beki on one side, and Sue, Brea and Matt on the other. With Brea gone, the factions seem unbalanced: Plus, the editors must be terrified of losing Sue, since she has been their go-to narrator voice for explanatory cutaways.

CROSS PROMOTION TIME! Sam Huntington is hugely excitable when he gets to pimp promote the US adaptation of Being Human. He drags the competitors down to the park for a foundation challenge: The best depiction of a werewolf attack gets immunity. It's head-to-blood-drenched-head for Heather and Beki, but ultimately it's Beki who gets to dodge this week's silver bullet. 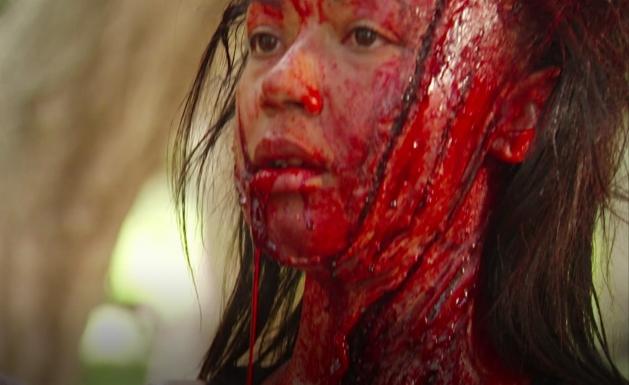 Bloody disgusting: Beki gets immunity from eviction (and from werewolf attacks) (Photo Courtesy of SyFy)

And to continue the furry theme, the studio has been emptied of make-up and turned into a menagerie/arboretum. Everyone gets teamed up to create something "stunningly beautiful, but also incredibly deadly" inspired by a plant and an animal.

Now allow me to call bullshit for one moment. Host McKenzie Westmore can claim that the teams have been randomly selected, but I sense the heavy finger of the editor gods on the randometer. Heather and Rayce, fine. Tara and Athena, yup. RJ and Ian, OK. But Jerry and Matt, followed by Sue and Beki? Co-inky-dink? I don't think.

Well, at least they're all trying to play nice (although did anyone expect anything but nice from Tara and Athena? They may have picked the Emerald Tree Boa as their spirit animal guide on this, but you know they would have gone for a bunny if it was on offer.) Jerry and Matt are an interesting pairing: Out of the remaining contestants, they are arguably the most experienced, so they should be able to do something special inspired by the African Spotted Leopard. Plus this week's version of Jerry seems to have dumped the ego: After all, he's been down in the back of the pack for pretty much everything except the first foundation challenge.

Aaaand then Beki and Sue start arguing about texture, with Beki on the verge of storming out. It's a flocking thing: Sue believes their tarantula beast needs to reflect the hairiness of a spider when seen close up, while Beki is all about the clean exoskeleton. Sue and Beki: Yup, it's about as convivial as it looks (Photo courtesy of SyFy)

This could be the catastrophe episode. At the beginning of day three of design, Heather and Rayce are still building an enormous tail for their monitor lizard, Ian and RJ's chameleon looks like an explosion in a concept factory, Tara and Athena have mercifully abandoned their plan to paste on every scale individually, and Matt and Jerry are the latest to fall prey to a model's medical mishap. So far we've had a near-drowning, a model passing out, and one who had to have their entire make-up removed because of an allergic reaction. Now Matt and Jerry's model has dry skin and keeps twitching while they try to apply the facial prostheses.

So off to the judging room and … Now wait. I know I was harsh about Asher Roth as a guest judge, but Vivica A. Fox? The only presented reason that she's here is that judge Ve Neill worked with her on Batman and Robin. Yeah, earlier in this episode Neill boasted about how she did the make-up for Poison Ivy on that rolling trainwreck. Boasted. Yeah, you heard right. The final line-up: No, the spider wasn't much better close-up (Photo courtesy of SyFy)

Meanwhile, RJ joins Ian at the front of the pack with their Panther Chameleon/Lady Slipper Orchid hybrid: The only possible weak spot is the face, which is what Heather and Rayce get right with their Firestick'd monitor lizard. With two good lizards in a row, Athena and Tara need to really shine. Athena's right that theirs is the only creature where they bothered to go all the way to the floor (side note: A lot of designs have this season have just gone for bottom-half curtains, rather than work out leg designs.) Unfortunately, their solution seems to involve painting over some Y-fronts, and the model looks baffled on how to sell it all, resorting to some awkward head bob.

No-one likes the tarantula. Sue is livid that Beki seems to have abused her immunity, submitting to bad design decisions and writing her own work off as "a Disney character." Neill slams the spider beast as having "rubber barf" all over it. Even the ever-affable Ian gets mean, saying that "it's not looking good." Frankly, it's, erm, well, horrible. Let's leave the analysis to Hetrick: "Safety pylons … big giant floaty tubes … I really don't think that have won a costume contest at a third grade Halloween party."

Not that all adversarially-edited relationships flop. Jerry and Matt are a fearsome teaming with their leopard-lady, even if Hetrick et al were looking for more of a plant/animal hybrid. However, the judges are most impressed by RJ and Ian because that's exactly what they managed. 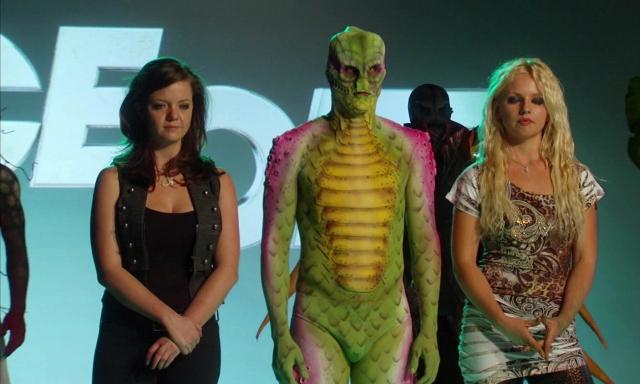 Tara and Athena and a lizard wearing pants (trust us, you're not the only person to notice.) (Photo courtesy of SyFy)

And the top design is … an ad break with a spot for Being Human! Nah, it's RJ and Ian, with RJ as the winner. Not a shocker, nor is the fact that Sue, Beki, Tara and Athena are all in the danger zone. Unsurprisingly, it's Athena heading out. Her one moment to shine was the body painting part of the Asher Roth challenge, but she's not shown the other skills required for a rounded makeup artist yet. Oh, wait, what, cliffhanger? Westmore appears out of nowhere and tells everyone they're not finished aaand roll credits. Curse you, cliffhangers!