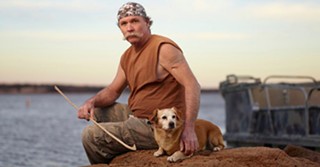 I know it's cats that are supposed to have nine lives, but certain catfish have remarkable staying power, too.

Bradley Beesley's documentary Okie Noodling, about competitive catfish hunting ("No hooks, no bait, no fear") has already spawned one sequel and an annual tournament in Oklahoma. Now it's headed to TV. The new reality series Mudcats premieres on the History Channel on Feb. 9; Beesley is the creator of the show and one of its exec producers. Frank will host a viewing party Thursday night with bands, fried catfish, and more.

Not sure how the locally produced raunchy comedy Bindlestiffs slipped past our radar, but it sure didn't slip past Slamdance's –  Andrew Edison and Luke Loftin's debut film won the Audience Award for Best Feature at this year's fest. Victory, alas, was bittersweet: Witness über-producer Kelly William's tweet-pic of the under-21 filmmakers barred from entry to the Slamdance closing night party.

In other festival news, filmmaker Ric Sternberg passed along word that his Central Texas-shot feature Camp Kickitoo won Best Comedy at the San Diego Black Film Festival in late January. Sternberg wrote and co-directed (with Mike Sullivan) the film, from a first draft he started 21 years ago. Perseverance, kids.

Here's what the press release had to say about the partnership:

"Jette has built a great resource for our regional film community, we all read Slackerwood every day," said AFS Executive Director Rebecca Campbell. "This partnership will allow us to promote our community in new, dynamic ways." AFS Director of Marketing Agnes Varnum will serve as Managing Editor and the publication will host an editorial committee comprised of local filmmakers, journalists, and AFS Board Members. In addition, AFS staff and interns will contribute to the website.

And on the subject of AFS, it teased the first names on the honoree list for the 2012 Texas Film Hall of Fame Awards: gruff, tough actor Barry Corbin (No Country for Old Men, Northern Exposure); filmmaker Douglas McGrath (Infamous, I Don't Know How She Does It, Emma); and Meat Loaf, who's had a profitable sidelong career in TV and film (Fight Club, Roadie), and also acted the shit out of that "I'd Do Anything for Love (But I Won't Do That)" video.

The 12th annual Texas Film Hall of Fame Awards, which moves this year from its traditional setting at Austin Studios to ACL Live at the Moody Theater, takes place Thursday, March 8. 2011's very funny emcee Wyatt Cenac will do the honors again this year. Go here for ticket info.

Attention SXSW Filmmakers! The Chronicle is currently assembling its festival plan of attack, and we want to make sure we get our eyes on your movies for feature interview and review consideration. Email us at filmflam@austinchronicle.com or just drop your movie in the mail to Austin Chronicle, attn: Kimberley Jones, 4000 N. I-35, Austin, TX. Don't worry: We'll keep your movies under lock and key.