Face Off Recap: All This Horror Business 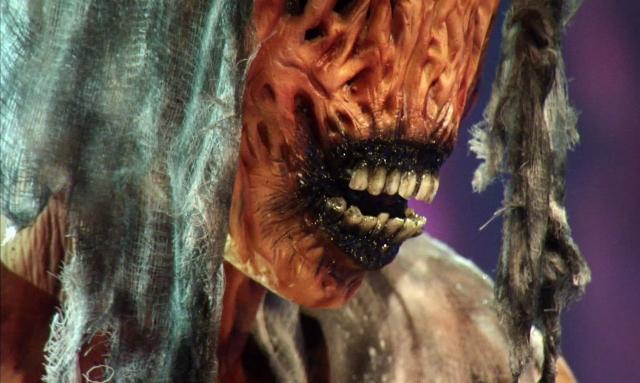 Dessicated delight: Close-up and horrific with Matt Valentine's xerophobic contribution to this week's Face Off (Photo courtesy of Syfy)

OK, not to harp on about this, but I wasn't that impressed by having Asher Roth as a guest judge on Face Off last week. But this time SyFy makes up for it with a genuine, in-the-blood, to-the-bone practical FX guru, Tom Savini.

No time-wasting, immunity-granting foundation challenge this week. Instead, it's a 3am summons to sketch in an abandoned hospital, announced by cellphone to Brea. Oh, er, again, not impressed. This is too gimmicky for my liking, but, you know, rough with the smooth. At least we get Savini for the first solo spotlight challenge: Design an iconic horror villain, inspired by a phobia.

So the contestants are driven to a shell of a building and, within minutes, we already have our Matt Valentine moment of the episode – the grin when Sue and Brea jump at a flashing light (what do you expect from a haunted house master?) Turns out the crew have been dumped at Linda Vista Comunity Hospital. Where's that? "One of the most haunted hospitals in America. Bwahahahahaha," cackles host Mckenzie Westmore (I added the Bwahahahahaha myself, but it was implied.) Astonishingly, the contestants don't run into the Ghosthunters crowd.

So, sketching over, back to the workshop and Tom Savini is in the house! Now Sue is a graduate of Savini's school, so at least she'll know what gore floats his boat: That said, he might be more demanding of her, and that's what seem to happen, as Savini and regular judge Glenn Hetrick (someone find that man a less snug shirt, stat!) question whether she has design coherence between body and head on her design. 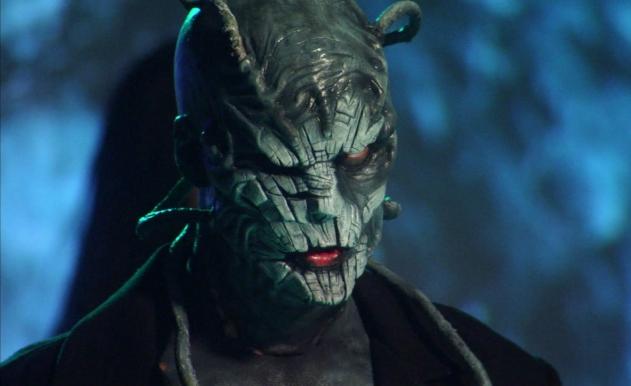 Paranoid and frost bitten: Rayce gets points for concept and loses them for execution with his frosty creation (Photo courtesy of SyFy)

Over on the studio flood, Jerry is yet again being edited to look like the surly, "it's all beneath me" kinda guy as he huffs and puffs about having to build the lighting rig that Savini and Hetrick suggested for his embodiment of electrophobia. He's also the guy that they let make accurate criticisms. Last week, it was that Tara's body paint was too thin. Today, it's that Brea seems a little too cocky about a less than stellar sculpt for chemophobia (fear of chemicals.) Then he falls afoul of his own hubris, remoulding his face piece and not giving it enough time to cure. The end result is a candy-colored, ECT-obsessed psychologist and a real swing-and-a-miss.

Meanwhile his old punching bag Tara is in panic mode, designing, redesigning and re-conceptualizing (DRINK!) her idea for ommetophobia (fear of eyes.) She is stuck in creative limbo, then comes up with a Egyptian goddess of fear. Sue's primal satyr is supposed to represent Hadephobia (fear of hell) but is really the fear of a cohesive concept (drink!) "Individually, the pieces look great, but as a whole, I made some bad decisions," she admits. I'm not convinced that Beki's bug woman (parasitiophobia – fear of parasites) is much better: The judges are impressed by the face, but for me this is looks like a piece from an early movie from The Asylum. She gets points for the iridescence and the speed of her work (as Savini said, it's one thing to be good, it's another to be good and fast.)

Heather's avian fetishist is getting there, especially the Thunderbird-sized skull helmet he wears: That said, the crows sticking out of his chest may have been better if they had been animatronic. Rayce's spirit of crypohobia (fear of frost) is excellence of concept (drink!), playing off how old, freezer-burnt meat appears. But the execution? (Drink!) Not so much, as the head piece pulls away from the neck, revealing the model's pink skin beneath. And RJ's blade-obsessed doctor looks like an abandoned early Simon Bisley design. First up, he seems to have confused xyrophobia (fear of razors) with aichomophobia (a more general fear of sharp objects) and it doesn't help that the big blade on his arm wobbles horribly. It's also another bad week for Athena, whose BDSM demoness is supposed to evoke merinthophobia (fear of being bound) but sadly looks like like a body dump.

So who goes home? Well guess what? Jeff was right. Brea was far too smug, telling the camera "I do chemical warfare and chemical burns as part of my job description." The end result seems half-baked, then she makes the same mistake she made in episode one's foundation challenge – having teeth jutting out from the flesh. The result is what acid queen Neil calls "chipmunk cheeks" and a quick exit.

For local fans, it's a disappointing week as Matt is in the mid-card (safe, not placed.) But it's a great week for Ian, whose revisionist tooth fairy is an odontophobe's nightmare. He gets real points for the execution (shots! shots! shots!), especially the rippled chest created with the ingenious application of Saran wrap.) My personal thinking is that if Rayce's neck piece had stayed down (and, as Savini suggested, if he had added some diamond dust just to add frosty sparkle) he would have had a great shot at the top slot.