Ain't It Cool News supremo Harry Knowles had given the found footage superhero flick a rave intro before welcoming Trank to the stage of the Alamo South Lamar. But, come on. A found footage superhero film? Isn't that two dying genres in one? Well, as our review shows, this is a great "you got peanut butter in my chocolate" moment, mixing four-color fun with shaky-cam to the betterment of both.

Trank explained that his commitment to reading comics had faded as his interest in film had grown, but it's hard not to see shades of The Fantastic Four, Green Lantern and a subtle tip-of-the-Eye of Agamotto to Doctor Strange. Film fans will detect shades of The Host and that Deconstructionist superhero classic Unbreakable, plus the unmistakable fingerprints of The Blair Witch Project. However, Trank explained that his big inspirations were the Holocaust documentaries of his father Richard and YouTube frat fights. "There is something unbelievable about Holocaust imagery," he explained. "You see this footage of people liberating the camps and it's kind of like an effects show because you can't believe these people are so emaciated.

As for YouTube, Trank said he was fascinated by the small, short, almost surrealist sub-genre of party videos: Jackass redux. He explained, "There's something creepy and bizarre about drunk kids beating the shit out of each other for no reason," he explained: That's what lead to his dark found footage/Star Wars mashup Stabbing at Leia's 22nd Birthday

That was the door opener, leading to his gig as editor and second unit director on Big Fan, then writing and directing the web spin-off of Spike TV's armed robbery drama The Kill Point. That allowed him to deal with the side stories and minor characters from the main narrative. Combine those trends, and that's what lead to Chronicle.

His original plan was for something more like disconnected shorts, of high schoolers doing dumb things with newly-acquired superpowers (after all, if you were 17 and a telekenetic, wouldn't you use your powers to beam your friends in the bean bag with a soft ball?) The final component was Max "Son of John" Landis, who turned the script around in two weeks. "He's the real deal," Trank said. "He's written about 235 scripts." And even though he took advantage of South Africa's emerging and brilliant FX community (with Cape Town standing in for Seattle) for Trank that script was what made the film work. "The real special effect is the story." 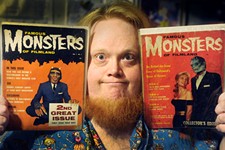