Remember last summer's Alamo Drafthouse anti-talking PSA? No, not the one with the old lady who doesn't "shiv a git." (RIP Peggy Struder.) The other one, with the ka-ka-ka-krazee drunk girl on the phone.

Yeah, that one. Turns out we weren't the only ones ROTFLOAO when that thing went viral. Longtime Alamomaniac (and constant Tweeter) Patton Oswalt and pal/Young Adult director Jason Reitman also got a kick out of listening to the anonymous female jabberjaw dig her own irony-infused grave via AT&T. So much so that they've made their own version. Frankly, we dig the original better, but it's nice to know the POPO is, as ever, on the same page. Check it: 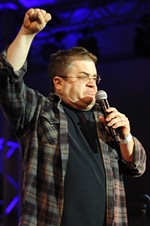