Mondo Dawn of the Dead Halloween 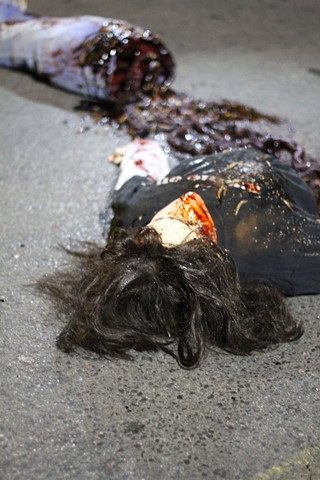 She is going to eat you. (by Jennifer Ayers)

...the dead will converge on Highland Mall. Or so they did for the Mondo/Alamo Drafthouse's super-secret screening of George A. Romero's Dawn of the Dead last Saturday night, which parlayed fake press releases into fake extras-calls into one hell of a nightmare to remember, if, that is, you could get the blood out of your eyes.

How did they pull this one off? Glad you asked. A call was put out earlier in the week for zombie extras who were told that they would be part of an actual film shoot. In reality, they were just there to scare the pants off of the several hundred official Mondo participants, who were bussed over to Highland Mall with no idea of what lay in store for them. (Insert M'wahahahaha here.)

As the busses approached, they were swarmed by a fully made-up hoard of some 300 zombies (lots of excited little kid zombies and their tagalong undead parents among them), defended by a camo-clad group of "soldiers" blank-firing automatic weapons, and buckets upon buckets of gore galore.

The creeptastic and insanely fun zombie attack was followed by the Dawn of the Dead screening inside the mall with a special opening appearance by Romero himself, who was clearly delighted by the massive and intensely creative nature of Mondo's coolest bait-and-switch event ever.

And as for us? At the last minute we decided to join the dead and had the pleasure of teaching Zombie Acting 101 to some of the smaller walkers. Hey kids, it's totally cool to drool all over yourself when playing a zombie. Also, rolling your eyeballs all the way back and then bumping into things because you can't see where you're going is okay, too. Oh, and don't forget to moan, or at the very least susurrate a bit from that gaping hole where your larynx used to be.