Literary horror challenges the brain but leaves us cold 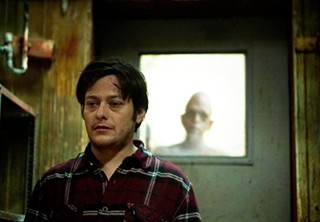 That unmistakable head: Michael Berryman stalks Edward Furlong in 'Below Zero' at the Austin Film Festival (Courtesy of Twilight Pictures)

Any serious horror fan would sit through five hours of Michael Berryman thinking about reading the phone book. There is something about that distinctive bald peak of a head, and the oddly soulful eyes beneath it, that balances pathos and otherness so perfectly.

That was what Wes Craven saw in him as Pluto in The Hills Have Eyes, and it is what a slew of directors from Rob Zombie to Leonard Nimoy and VHS grindmeister Fred Olen Ray have tried to recapture (with varying success.) Berryman's gangling, hairless frame and buggy eyes have made him a visual shorthand for weird, a prop for directors to scream "my film is somewhat creepy."

But Austin Film Festival is much more a writer's festival than a celebration of the director, and that is what Below Zero concentrates upon. Edward Furlong (Terminator 2: Judgment Day) is a screen writer on a downward plummet who attempts to resurrect his career by getting sealed in a meat locker, so he will be forced to work on his next script.

Below Zero comes with the "based on a true story" tag since writer and Great American Pitchfest founder Signe Olynyk actually locked herself in a meat locker to write it. She catches the writer's satisfaction with and paranoia about self-enforced isolation. The strongest moments are when the lines between Furlong's icebox reality and the internal monologue of his draft script merge, allowing Furlong to become deus ex machina to his own movie-within-a-movie analog. Yet those moments are few and far between, and much of the rest feels like Olynyk's "What I Did on my Very Strange Vacation" essay.

After shaking off a late-Nineties drought, Furlong has become a jobbing regular again (18 films released since 2005, another three in the can plus a well-regarded run on CSI:NY.) Fortunately, there is more of the raw talent he showed in American History X than whatever it was he phoned in for schlockfests like Intermedio. He brings a febrile and claustrophobic sweatiness to "Jack the Hack," working through the writer's self-loathing and ego. Unfortunately, Kristin Booth, pulling double duty as farmer Penny outside the script and victim Paige inside, hawks a sub-Fargo accent so grating and dense that she may as well be called Marge Gunderson and have done with it.

And then Berryman turns up for a few minutes and the screen lights up with a gory, ghoulish glow. His brief but fleshed-out scenes as the body-chopping Gunnar tap into that late Seventies' body horror that gore fans crave from him. Ultimately, that matter trumps the meta, and it may have been more rewarding to see the conventional horror that pumps through Below Zero's icy veins. 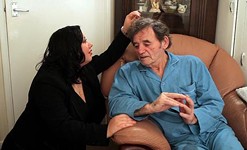 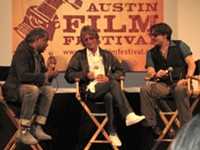