FF2011: Getting Rabies in Israel

Tel-Aviv finally gets bitten by the horror bug 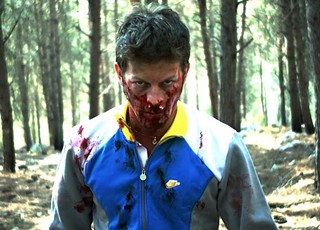 'If you make a believable character, even if you take a pin and stick it in his arm, it's horrifying for the viewers. You don't need to grind him up with machetes.' Writer/director Aharon Keshales on empathy in 'Rabies'

Seems like Fantastic Fest is becoming quite the destination for nations to show off their first ever horror film. Not only did Cuba draw first blood with zombie satire Juan of the Dead, but now Israel has its own initial stab at the slasher genre with Rabies.

For co-writer/directors Aharon Keshales and Navot Papushado, their first feature collaboration is part of a new resurgence in Israeli cinema: For years, it has been dominated by personal dramas and war films: Now, with the release last year of Biblical spoof This is Sodom (which Keshales called "the first pure comedy in years") and their feature debut, the industry's limits are expanding. Abandoning the traditional track of getting state funding, they created a sly and subtly dark comedy that is already picking up big festival buzz.

Recovering from Fantastic Fest, the duo took a few minutes before returning to Israel for pre-production on their next feature (a subversive kidnap flick) to talk about making the first Israeli horror film.

Austin Chronicle: So how did you come to be the people to make the first Israeli horror?

Navot Papushado: Aharon was actually my professor at Tel-Aviv University, and I think he was the only one who really encouraged me to do my own stuff. It was also eventually the things Aharon liked, but as a professor he thought, well, maybe the students will eventually make a film that I will like to watch. We became friends on the basis of that. Aharon was the only teacher I would come to show my films and really take notes, because the other teachers were much older and much more conservative and really didn't know what I was aiming for. Right from the start, Aharon encouraged me. My first short film (New Born) was picked up for the Cannes Film Festival, and I owe it a lot to Aharon and his mentoring in those days. We became good friends, and by the end of my studies he become my producer. Together we created another horror-slash-drama short (Zeitgeist). We premiered that in New York and were there for a few days. On the last day, we went to Atlantic City, to have the ultimate American experience. You know, losing all our money in the slot machines, eating burgers, smoking cigars on the beach, and then we went to see Tool, the band, in concert. So for us it was like the ultimate American experience. Aharon has this cool picture, like Tony Soprano, and we said, OK, what's the next thing? Of course, it has to be a feature film and he said, 'Of course, it has to be horror. But pure horror. We're not going to hide it any more like we did with the student film.'

We had an idea of doing a slasher film and we thought, OK, what would an Israeli slasher look like? He won't be very methodical, he won't be very capable, because that's not the Israeli mentality. We are kind of laid back, kind of, 'Everything will be OK. Chill, man.'

Aharon Keshales: We like to do half the job, and then trust God to do the other fifty percent. You always say in Hebrew 'Yihyeh Beseder,' which is, 'It will be alright.' You trust something from above, like a Deus ex Machina, to come to your help. So if you're a plumber, you'll do half the job. You'll see that it starts working. You'll know deep inside that it's not completely OK, but you'll say, well, it's working for now. You'll tell the customers that it's OK for now, and two weeks later, ker-chow, and you call him again. That's the Israeli mentality for the working ethic, so we thought of a killer in the same vein. he would put traps all over the place, but he could probably fall into one of them.

AC: In the context of the film, that's interesting. You have a killer who just wanders off and thinks that his victims will just fall into that trap, and then the potential victims seem to be believe that everything will be mystically fine.

AK: In recent years, all the slasher films are reduced to just a person killing people, You don't know anything about the killer, but you started knowing nothing about the victims, which is a horrible thing. If you don't know anything about them, you don't care, and if you don't care, there's no real tension. If you see the last few chapters of Final Destination or, not the first Saw but the later ones, there's no character movement, just torturing, torturing, torturing. The thought in Hollywood is that, if you put something really nasty on the screen, that will work on the audience, and we come from another background. We grew up on the films of the Seventies, and we said, 'No. If you make a believable character, even if you take a pin and stick it in his arm, it's horrifying for the viewers. You don't need to grind him up with machetes.'

NP: We had to think of some multi-layered characters, some really nice characters that you would like and relate to, and won't just wait for them to die. We thought, OK, that's something we haven't seen in a while. A slasher film where you actually care for the characters and have something to say about them. I think that's where Aharon, who was a film a critic and a professor, and he was really famous for writing very popular writing, but his passion for Hebrew, you could see it so clearly. As a student. I kind of admired his writing and was always encouraging him, 'Aharon, you have to write scripts.' He was too shy, and said, 'No, I'm good.' His life long dream was to become a film critic.

AK: You ruined my dream.

NP: We talked together and Aharon said, 'OK, you have a really good idea,' but Aharon never really thought about directing it. But after the decision to make really multifaceted characters, then something sparked in Aharon and he went, 'OK, I think I can relate to that.' I think that was the biggest gift to the movie.

AK: He lured me. He did a little hypnosis on me. It was like, 'OK, let's talk about the idea. OK, so what about writing it together? OK, so we already wrote it, and I think we'll get probably get a good cast, so why won't you direct it with me?' So I found myself, well, now I'm a director.

I didn't think to about being a director or writer/director. I always tell it, at the age of 13, in my school year book, it was written what everyone is going to be ten years from now. I wrote, film critic, teacher, and I did that at the age of 25. I always wrote a bit off-beat, even as a critic. I used to write dialogues, like a mother and her daughter go to see a horrible movie together and then they have this dialogue on this film. I think everyone who read me thought, 'This guy is really crazy and really should be making movies.'

Navot, from my point of view, is my best student. He was the only student who came into Tel-Aviv University and he graduated the same way he started, with a dream to be the next Steven Spielberg or the next Quentin Tarantino. Everyone starts off with this dream to be the next visionist, and they come out the back wanting to be the next Béla Tarr. He always asked me, 'Why do people have this change? You're still young, your juices are running, why do you want to do a film about old people rotting away, or dysfunctional families? There's time for that. You can be fifty or forty, but not when your juices are running. Don't you want to do something full of passion and full of enthusiasm?

AC: During the Q&A at the second screening, you mentioned that there are a lot of big-name actors. Was it tough to get them on-board?

NP: One of the biggest roles that we knew we were going to write was the bad cop. For us, he was the Joker. We thought of him as this wild card without any boundaries, and it took us so long to find him. Aharon always knew who he wanted (Danny Geva) and I kind of spread the rumor that this guy wasn't going to act any more, that he wanted to be a director …

AK: … he started off a rumor that I believed …

NP: We saw all the biggest actors in Israel to fill that role and finally we said, 'OK, Let's approach this guy.' We gave this guy a call and he said, 'Oh, I've been waiting for you guys to call me.' We talked for half an hour and eventually we said how much we would like him to be in this role. The funny thing is that, after one hour, he said, "OK, I'll come back from Europe, I'm going for a small vacation, and we'll meet.' So we say, OK, when are you coming back, because we're shooting in three weeks and we really want to do matching with you and the other cop, see if it works. He said, 'I'm going for my honeymoon for a few days.' 'Ah, you're getting married!' He said, 'Yeah, actually, I'm getting married in like 30 minutes. I thought you were one of the guests.' 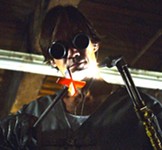