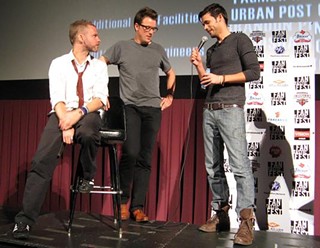 'The Day' producer Guy Danella (with star Dominic Monaghan and writer Lucas Passmore): "I like seeing chicks in dresses with shotguns and machetes killing the shit out of cannibals." (photo by Richard Whittaker)

When Guy Danella started producing The Day, he knew what he did not want to see again. "Out of all the post-apocalyptic movies," he said, "it seems only the idiots survive, and they love raping people and wearing shoulder pads and ski goggles, for whatever reason."

The result of that response is The Day, which is the antidote to every low-budget Waterworld wannabe. Directed by Douglas Aarniokoski (one of the most trusted assistant directors in the business and a regular with both Charles Band and Robert Rodriguez), it follows four high school friends and a stray they picked up in one 24 hour stretch years after some unstated global collapse.

This slab of end of the world blues made its local debut at Fantastic Fest on Saturday, and returns tonight (Sept. 27) for another screening. For screenwriter Lucas Passmore, the appeal of a post-apocalyptic road trip was simple. "You get a chance to be a superhero without having superpowers," he told Saturday's audience. "Of the 99% who died, you're the one who survived. You can't fly, and you can't shoot laser beams out of your eyes, but you have some inherent badassness."

Part of The Day's fellowship is Dominic Monaghan (who was mentally preparing for his big mano-a-mano showdown with Lords of the Rings co-star Elijah Wood later that night.) He was looking relaxed as he explained why he signed on for the post-apocalyptic road trip. He said, "One of my favorite things about the script is how layered it all feels. I love the way that Luke doesn't explain what happened to us to get there, to the world. We're just all dealing with it."

While The Day has its fair share of action sequences (you can't survive Armageddon without beheading a few cannibals, right?) Danella said, "We tried to make it as normal as we can. We got rid of all the shoulder pads and goggles." The point, he added, is that "this is a glimpse of real people that, hopefully, you can relate to, and on a day-to-day basis you talk about random bullshit. It's not that interesting, really, so we tried to bury all that subtext beneath those characters. We talked a lot about who they are, what's going on, but we wanted to feel authentic, so you're thrown right into the movie and you should keep up."

Case in point: A pivotal but low-key conversation between Monaghan's character Rick and his old school friend Adam (an unrecognizable Shawn Ashmore.) Monaghan said, "Doug, the director, had run it with us a couple of times, and he just said, 'You know what? Just kind of say your stuff, but just find a place in the middle where you can find something to reminisce about, and he just rolled camera."

It is that kind of character beat that Monaghan said separates The Day than the billion Mad Max knockoffs. He said, "There is a longstanding relationship between those two characters, so it's good to see them, in these semi-moments of safety, revert to those things that boys tend to do when they're chilling out, which is just talk about tits."