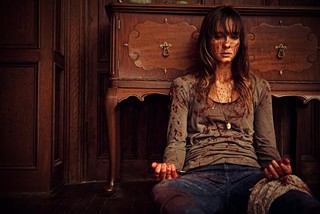 Sharni Vinson: "My Australian agent actually said to me, 'Once you've done a show like 'Home and Away' and you've done it well, I don't think there's anything you can't handle." (Image courtesy of Snoot Entertainment)

So You're Next blew through Fantastic Fest last night with a raucous midnight US debut. The lucky mob that got in to the single screening saw exactly why Lionsgate battled to pick up distribution for the crowd-pleasing arthouse horror: Sharni Vinson's genre-busting turn as Erin, the antithesis of the damsel in distress.

If you only know Vinson from like summer screen fillers like Blue Crush 2 and Step Up 3D, you may have missed the most important part of her CV to date: Three years on Home and Away, one of Australia's biggest soap operas. If you're thinking All My Children, you are way off-base. Just after the film had its world premiered at the Toronto International Film Festival, Vinson talked to us about blood continuity, acting with directors, and why Australian soaps are one step from being a horror movie themselves.

Austin Chronicle: I have to ask you about your time in Australian soap operas.

Sharni Vinson I really do have Home and Away to thank as my launching pad and general training ground. because that show really teaches you the ins and outs of the industry. Once you've come from a show like that, where you really do work every day, 46 weeks of the year, it really gives you an amazing work ethic and training background for better things. And if you can utilize that to your fullest potential, you can go a long way

AC: Aussie soaps are notorious for really putting their characters through the ringer.

SV: I particularly got very gritty story lines. My character was always the victim of something. She was the victim of sexual abuse, and then she was the victim of physical assault, and then I ended up pregnant with AIDS at 18 years old on the show. When you're thrown such huge story lines, it really does challenge you early on in the piece as a young working actor. My Australian agent actually said to me, 'Once you've done a show like Home and Away and you've done it well, I don't think there's anything you can't handle.' They really do throw everything at you.

AC: It must have set you up pretty well for an action-horror like You're Next. Why did you want to work with Adam Wingard and Simon Barrett?

SV: When the audition came up, I read the script for You're Next and I thought it was absolutely fantastic. It was definitely a project that I wanted to become involved with, based just on the script and the female protagonist and the fact that she's really bad-arse and strong, and is really embodying a strong female role model. So I went out and I watched A Horrible Way to Die, and I knew that it was quite a brilliant duo, the two of them, and I could see from that film that they were not scared to film outside the box and think outside the boundaries of general cinematography. I really loved how the whole film was shot. I was also aware that three of the actors from that movie were going to be recycled into this film, and I thought their performances were exceptional. A script is only as good as the actors can make it and the director can shoot it, and I saw a great combination, a very strong potential movie here.

AC: Was it challenging walking into that kind of almost collegiate environment, where everybody knows everybody else?

SV: The thing that was quite comforting was that one of my best friends and my room mate of three years is actually Wendy Glenn, who plays the character Zee. So the most comforting thing about it was coming in with her, knowing that we were going into this together and we were going through everything together when we moved our LA life style to Missouri for a month. But to be honest everyone on set was just so amazing. Everyone's just such beautiful people, and everyone seems not just to be actors. There's a lot of directors in there as well, in Joe Swanberg and Ti West, and Amy (Seimitz) being a producer as well.

AC: Adam and Simon are famous for creating parts that are emotionally grueling. Which was tougher, that or the physicality of the role?

SV: I think just the fact that, because I am in almost every scene in the movie, I was required to be on-set at all times. It did become quite long hours and we did shoot the entire movie in the twilight hours of 7pm to 7am in the morning, six day a week night shoots. So it just became a lot of time, and also because my role was so physically demanding, it did become quite exhausting. But having said that, those are the kind of roles that I crave, and that I yearn for, because I'm somebody that gets bored on set quite easily if I'm not working. I would rather be on set working the entire 12 hours, rather than be there just sitting around waiting for my scene to come up. So the fact that I was actually constantly utilized throughout the production worked for me, and then when I had moments off I was never actually sitting down. I was always working with the stunt coordinator, figuring out the next stunt, figuring out how we could make it better. He was giving me knives, real and fake knives on-set, to just practice knife twirling and little tricks like that, that just always kept me focused and entertained.

That's what I love about shooting action movies. You're always busy and you're always doing something. Even though it was quite challenging, they're the most rewarding challenges when you pull them off at the end of the day. I just love it all, and I just want to learn. Like all the blood effects. This was the first time that I've been able to work with special effects and prosthetics, and utilize these crazy amounts of blood and continuity with blood, and through the hair. It all got very messy, but at the end of the day that's part of the fun of the game.

AC: So the Twitterverse exploded about the bidding war after the Toronto screening. How was the audience for that?

SV: It was insane. It was the first time for me seeing the movie, because they only completed it the day before we brought it to Toronto. They were working non-stop up until that final day, so there was never a moment when any of the cast members were privy to the film prior to that first screening. So it was very special to be in a cinema of 1,500 people and be able to experience a real audience reaction. As much as I would love to say that I can watch this movie and appreciate it from a typical audience point of view, I can't because I know what's coming. I'm in the movie, I was there on the day, I was there for all the special effects. So no matter what I don't think I'll ever be able to watch the movie as a general audience member. But there was something special about being surrounded by them, and hearing them laugh at the moments where we weren't sure if they would, and they totally got it. They were jumping out of their seats and scared at those moments, and to hear them really get behind my character Erin, and getting so involved, cheering. It's just such a feeling of satisfaction, it's incredible.

We really had it sussed. We had a graffiti artist come in and tag the streets of Toronto with the sign and the posters, which created some initial buzz. We also had replicas of the fox mask made. On the way walking to the theater which, by the way, the line went out the door and around the entire block, we just couldn't believe that these people were here to see our movie. Then the first 60 people in the line were all wearing these fox masks. I thought that was kind of amazing, to get to the front of the line and see all these people standing there in our masks, and to be doing the Q&A and looking out at the audience, seeing all these random people wearing the fox mask. It was quite spooky.

Read our interview with You're Next writer Simon Barrett and director Adam Wingard here. The film goes on general release in 2012.