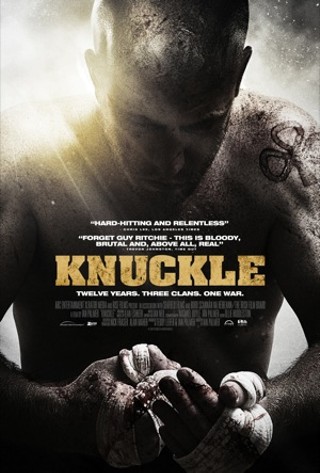 When filmmaker Ian Palmer stumbled into the shadowy world of bare-knuckle boxing and bloody feuds amongst the native Irish subculture known as Travellers, he had no idea that twelve years on he'd be premiering his documentary Knuckle at Fantastic Fest. We're psyched that he's here, though, and spoke with him about the Travellers and his film.

Austin Chronicle: First off, can you explain to us Yanks what the whole Irish Travellers subculture is about? We know Brad Pitt played a pugilistic Traveller in Guy Ritchie's Snatch, but that's pretty much all we know.

Ian Palmer: Travellers are, first of all, native to Ireland. There are references to them throughout history going back to the 13th or 14th century. They're really an Irish equivalent of Gypsies in the broader world. Gypsies are nomadic, they trade, they may do a bit of tinsmithing, a bit of horse stealing, all sorts of stuff like that.

Travellers fill the same space in Ireland, England, and the rest of the countries they've migrated to, as Gypsies do. They're traditionally nomadic, with horse-drawn caravans, but specific Traveller families in Ireland would have been found in specific areas. They would do seasonal work such as bringing in potatoes, fixing pots and pans, and so forth. If we could step back in time they probably would have been nomadic metalworkers in the Middle Ages. It's a bit unclear where they originally came from but there are references to them going back a long, long way.

AC: Are they still nomadic? The families in Knuckle seem to be rooted in their own households.

IP: They stopped being truly nomadic in the 1950s and 1960s, because the work in the countryside was dying out and government policy tended to want them to settle down. They now live on government-run trailer parks. But they still do a lot of traveling and they tend to live among themselves and marry into themselves in the margins of society.

AC: How did you gain access to the off-the-grid subculture of Ireland's Travellers?

IP: My friend Michael Doyle, who is in fact the cinematographer in Knuckle, had made some community films with some Travellers and he knew the McDonaghs. He invited me along with him to meet them and I thought it might turn out to be a good documentary subject. So I met James Quinn McDonagh and the relatives and got to know them fairly well over a period of months. One of the girls from one of the families was getting married and they asked me to shoot the wedding because I was already hanging around with a camera. I agreed, but I said I'd like to be able to use the footage for a possible Traveller project sometime in the future. As it turned out, the boy who was getting married was Michael Quinn McDonagh.

AC: Were you aware of the feud between the Quinns and the Joyces at that point?

IP: I didn't know anything. The film actually shows my first encounter with the boys. I walked around a corner and James was playing pigeon-toss with his mates at the wedding reception. They were just gambling for a few bob which is normal at Travellers weddings. James was training for a fight and they asked me to come along. One thing led to another and twelve years later I finished the film.

AC: The fights in Knuckle are incredibly brutal and are, apparently, the result of unending, age old feuds like that of the American Hatfields and McCoys.

IP: It is very like feuding hillbillies in the Blue Ridge Mountains. You can see these kinds of conflicts all around the world, in tribes in Afghanistan, the Balkans. It's small clans of people who are related to each other having long-running feuds whose origins are a bit cloudy and lost in the mists of time.

AC: At one point in your film, you express some ambivalence about continuing the project at all. What was it, specifically, that made you think twice?

IP: By that point it's 2006 and I'm really getting weary of it all, and suddenly I got a call from James, who by then was refereeing fights for other families, asking me if I wanted to come along to one more fight. I went along and it turned out to be two old men fighting, grandfathers, elderly men, certainly, in fighting terms.

It was up in the forest on one narrow track, blocked off by cars, and a hundred and fifty highly agitated males. Which was unusual for a fight. Usually the men were kept away. And it really got to me. I thought, you know, this is very dangerous, what was I doing there, I'd been doing this now seven or eight years, and there I was filming a couple of grandfather's beating the hell out of each other. I just felt that's enough. I'm done. So I took the tapes, the footage, put it all in a box in the spare bedroom and said "That's it, I'm done with it." But of course I wasn't.