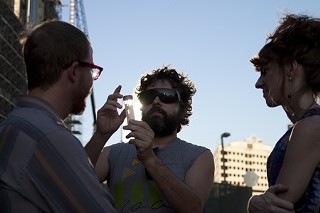 Funding your film is an unavoidable hurdle that every filmmaker, from the simplest short to the most complex narrative feature, has to deal with. Lucky for us Texans, though, the Austin Film Society's annual grant program the Texas Filmmakers' Production Fund just awarded a total of $111,000 to worthy Texas-based projects.

That ain't chump change, either, when you stop to consider that a young Robert Rodriguez self-funded his debut feature El Mariachi for a mere $7,000 way back in 1993, jump starting, along with Richard Linklater's Slacker, the now-mammoth Austin film scene.

To date, the TFPF has given out over $1.2 million to 313 film and video projects since the program was initiated in 1996.

This year's TFPF doled out $92,000 to 21 separate projects, including cash grants of $81,000, $6,000 worth of Kodak film stock, and $5,000 of in-kind services from Seattle-based Alpha Cine Labs. In addition to that, the Texas Filmmakers Travel Grant program also disbursed another $7,000 in cash in travel stipends to 10 Texas filmmakers and $12,000 to 24 Austin filmmaking teams to produce Slacker 2011, which premieres at the Paramount Theater this Wed, Aug 31.

See below for the entire grant recipient list. For more information on the history and operations of the Texas Filmmakers Production Fund can be found on the AFS site.

THE CURSE AND THE JUBILEE
Ivete Guerra Lucas
55 min documentary
$3,500 for production