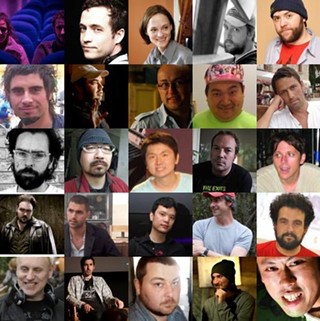 The list of directors for Drafthouse Film's upcoming horror anthology The ABCs of Death reads like a Fantastic Fest yearbook. Now another familiar name joins the roster: 2010 prize winner Jorge Michel Grau has signed up, along with Metalocalypse producer Jon Schnepp.

If you have ever rocked out to the closing theme of Adult Swim's tale of the world's most brutal metal band Dethklok, then you would have been headbanging through Schnepp's name: He has produced and directed the black metal aping/loving show, as well as co-directing much of the first half of season four of The Venture Bros. Fantastic Fest regulars should recognize Grau's name from We Are What We Are, the winner of the best picture and best screenplay in the Next Wave spotlight competition at Fantastic Fest 2010.

So what is The ABCs of Death? Think of it like Slacker 2011, but with gore instead of Austin landmarks. Along with the 24 directors announced back in June, Grau and Schnepp will each be doing one of 25 letter-themed deaths in the anthology. So what about the 26th letter? Since Bruno Forzani and Hélène Cattet (Amer) will be working together, that leaves the letter T, which is being reserved for a first-time film maker, who will be selected by competition. Visit www.26th.theabcsofdeath.com to check out the rules and vote on the initial submissions. The submission deadline is Oct. 1, and public voting ends Oct. 31. The final winner will be selected by the other directors on Oct. 15 from the people's choice top 10.

For local talent hunting a more immediate outlet for their warped talents, there is also the annual Fantastic Fest bumper contest. This year's theme is altered states: Each bumper must be between 15 and 45 seconds long, but the competition closes on Sept. 5, so start filming now.

Those FF bumpers can lead to greater things: Hobo with a Shotgun's Jason Eisener first grabbed our attention in 2009 with the wonderfully inappropriate "The Number to Heaven. And guess what? He's also one of the directors for The ABCs of Death, along with two of Grau's fellow Fantastic Fest 2010 award winners: A Horrible Way to Die director Adam Wingard (who returns to FF 2011 with his new flick You're Next) and Norwegian Ninja's Thomas Malling. Add on FF regular and freaky dancer Nacho Vigalondo (who brings his new feature Extraterrestrial to FF2011); Chilean martial arts god Ernesto Diaz Espinoza; the twisted genius behind A Serbian Film Srdjan Spasojevic; and the subject of this year's retrospective, Ti West.

Fantastic Fest 2011 is just around the corner, with the first and second waves of feature films plus the short films announced: But there are still more films to be confirmed. Just this morning, festival supremo Tim League wrote on Facebook that he is just finalizing the booking: "Five slots left, lots of hard decisions."

Here's the full list of ABC directors so far, and check out the number of FF, SXSW and SXFantastic alums and award winners:

Jorge Michel Grau (We are What We Are, Fantastic Fest 2010 Next Wave best picture and screenplay) Mexico