A 'Fright Night' at The Opera

Stars of the remake get all Marx Brothers at the Drafthouse 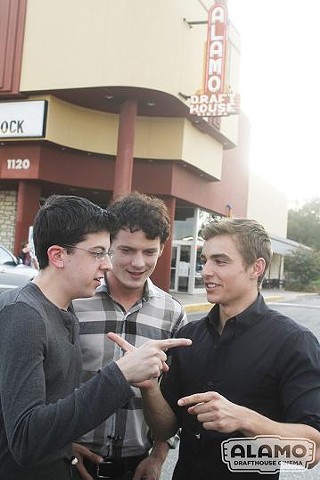 "There ain't-a no Sanity Clause!" Christopher Mintz-Plasse, Anton Yelchin and Dave Franco get goofy at the Alamo (Photo courtesy of Jack Plunkett)

Quick note to interviewers. There are three easy hints to getting on the good side of the cast of Fright Night. Remind Christopher Mintz-Plasse that you've seen his Paul McCartney impression, tell Dave Franco you liked him in Scrubs, and let Anton Yelchin have the fries.

The remake of the 1985 cult classic opens today (read our review here) but the three stars dropped by the Alamo South Lamar on Wednesday for an evening of axe-wielding and blood sangria. While the sneak peek audience got to see Colin Farrell ripping out throats on-screen, his co-stars were hanging out at the Highball, waiting for their response.

After all, this is kind of holy ground the film makers were treading on. The original was an entry drug for many young horror fans in the '80s, arriving at the peak of VHS. While the gore die-hards were furious about artistically stillborn projects like the The Hills Have Eyes rehash, this is a whole generation's teenage years they were messing with.

"Boo, remake!" said Mintz-Plasse. "I'm not a really fan of remakes, and I know there's a lot of vampire movies. When I saw both of them combined, I went, 'Uh.' But then I saw this man was attached" – he pointed to Yelchin – "and Collin Farrell and (director) Craig Gillespie … "

"And Dave Franco," interjected Franco himself.

Mintz-Plasse nodded. "Dave Franco was the first to be attached. Before the producers, before anybody, Dave Franco signed on and that's why Dreamworks started making this movie."

"Don't have to be a dick about it," Franco retorted, and the interview room collapsed into first of several fits of the giggles. Basically, the good-natured trio were one good mirror gag from a Marx Brothers routine.

As staff brought over stacks of snacks for the guys, Yelchin, the quiet one of the three, was politely eying the food without diving in. He has already inherited some big roles, having taken on Kyle Reese in Terminator Salvation and Chekov in the Star Trek reboot. Now with Fright Night he steps into William Ragsdale's part as Charley, the less-than-fearless vampire hunter. "The first one is just brilliant," he said, "Aside from the importance it has for a group of people, as a film it was really smart. The way it looks at the horror genre, the transition from classic horror to 80s horror."

Fortunately for Yelchin, the reboot redraws a lot of the plot. "There's definitely a different arc to Charley," he said, but that does not mean he ignored Ragsdale's performance. He said, "What's done so beautifully in the original is how manic he gets. I particularly watched that in making this film and re-watching scenes from the original, to make sure that he gets just as manic. It's done so well, that loss and that fear that no-one will believe you."

"You should try these fries, Anton," deadpanned Mintz-Plasse, and another giggle fit broke out.

While the remake needed to remain respectful to those roots, Yelchin knew this script had to face its own cultural transitions: "Kids are over-saturated with the vampire genre, and 'dealing with the vampire moving next door.' So the arc is very relatable, in that everyone has a point where you wonder what your values are, and how to preserve what's true to you." While it seems everyone else is turning their vampire tales into "a suburban melodrama," with Fright Night "you learn in the first scene that this is a vicious monster that is going to destroy everybody."

If reviving Charley was a challenge for Yelchin, the big pressure was on Mintz-Plasse. As the new Evil Ed, he had to measure up to Stephen Geoffreys' bug-eyed speedball, and the rest of the cast knew what pressure came with the part. Franco said, "Everyone seemed to love Evil Ed from the original, so it's a hard role to take over. Everyone wants to hate you before you started."

Last time Mintz-Plasse was in town, he was stepping out of the shadow of McLovin to become villain-in-waiting the Red Mist for Kick-Ass (that was where he test-drove his not-bad McCartney impression to match co-star Aaron Johnson's John Lennon.) Now, he gets to continue his development into Hollywood's least likely two-fisted star. "I'm like the lame action hero," he said. Aside from getting sucker-punched in Superbad, in Role Models "I fight with foam swords, in Kick-Ass I shoot a 13 year old girl, and in this movie I guess I'm kind of an action villain."

Franco had a different kind of burden. "It's not as glamorous as you think to be a vampire," he sighed. "You put these quarter-sized black lenses in your eyes, and I had a really difficult time putting them in. The lens women, she'd been doing this for 15 years and she said I had the most difficult person she'd ever worked with in terms of getting these in."

"She hated you," added Mintz-Plasse from the peanut gallery.

"I would too," replied Franco. Add dirt and mud into the mix, and he ended up with "a crunchy blink. … In between scenes I would just sit in the corner and look down. I wouldn't talk to anyone because all you could concentrate on was how much pain you were in."

"Dude," grinned Mintz-Plasse, "You looked like a really stoned vampire."