A casual game with something for everyone 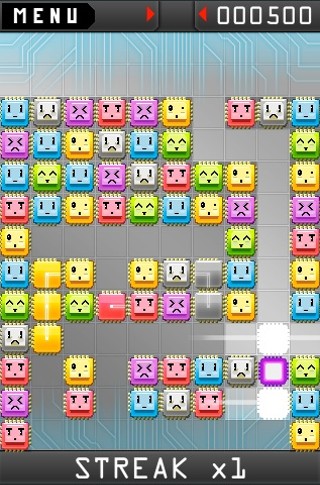 Is it racist to make all the purple chips look angry?

There are scads of games for portable devices that offer a variation on the match-three or color-matching paradigm. What makes a good iteration of this type of game is accessible controls and addictive gameplay. What makes a great game of this sort, in my opinion, are the details and the depth. Locally developed Connectrode manage to nail them all.

Made by Deep Plaid Games -- which consists of Shay Pierce and that's about it -- Connectrode consists of multicolored chips that must be connected along a grid so they'll disappear. Too many blocks can get claustrophobic real fast, and too few blocks might necessitate a risky cross-grid connection. The brilliance of the game is that, like Drop 7, Connectrode can be played on the easy levels and completed much like a word search (involving nothing more than time and determination). On the harder levels -- especially if you're shooting for a high score -- chess-like planning is helpful if not necessary. In other words the game is as hard as you want it to be.

The lack of a time limit makes Connectrode much more of a blissful experience (the soothing, ambient soundtrack courtesy of David Pencil helps) a la sudoku rather than a Tetris-esque anxiety fest. And while it may seem like a small thing, Robin Arnott's sound effects of exploding chips and connectors are deeply satisfying in a way that brings the player back for more. Another integral detail is the art design that gives the chips anime-style faces with a touch of personality. My little cousin wants to be the blue chips because "they look the happiest." This may again seem like minutia, but cuteness (within reason) is why Angry Birds is a colossal hit and no one has ever heard of its predecessor, Crush the Castle. If those pigs weren't so smug players wouldn't try so hard to destroy them.

All said and done, Connectrode is easy to pick up and hard to put down. And for 99 cents, you really can't go wrong.