A Tribute to Elizabeth Taylor Surely, many fans will begin spinning their DVDs now, but two weeks will fly by fast before it's time for Turner Classic Movies' 24-hour Tribute to Elizabeth Taylor, set for Sunday, April 10.

The actress, two-time Academy Award-winner, humanitarian, LBGT ally, and one of the first celebrities to activity advocate for AIDS research, died today after a long battle with congestive heart failure at age 79.

Below is the film list included in the 24-Hour tribute to Elizabeth Taylor, direct from TCM. Check local listings for updated information:

9am – Conspirator (1952), with Robert Taylor and Robert Fleming; directed by Victor Saville.

10:30am – Father of the Bride (1950), with Spencer Tracy, Billie Burke, Joan Bennett and Don Taylor; directed by Vincente Minnelli.

3am – Ivanhoe (1952), with Robert Taylor and Joan Fontaine; directed by Richard Thorpe.

Check out some stunning photos of Elizabeth Taylor here. 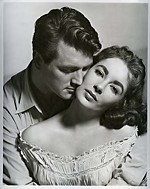