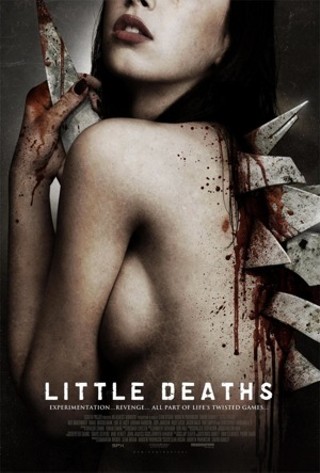 Here's the pitch: three British directors who have won legions of fans via their previous entries at Fantastic Fest create a gooshy tripartite horror anthology film. Remember Amicus Productions' '72 triple-narrative shocker Tales from the Crypt? That was a long time ago. Little Deaths breeds nightmares.

All three entries here deliver the godforsaken goods (and the bads, and the unspeakables) in fine, phantasmagoric form.

Sean Hogan's House and Home is particularly, entertainingly vile, with unsane couple Richard (Luke de Lacey) and Victoria (Siubhan Harrison) roping in a homeless waif (the excellent Holly Lucas) to be the trois in their deeply disturbed menage. Hogan's film is, by far, the most disturbing of the three, making horrific use of those precious bodily fluids and a grisly "turnabout is fair play" vibe.

Andrew Parkinson's Mutant Tool revolves around Frank (Daniel Brocklebank), his ex-doper girlfriend Jennifer (Jodie Jameson), and hallucinatory medical experiments, of a sort, gone terribly awry. (What is it that lurks behind the ratty shower curtain?!)

Creepy like discovering a blood-tacky filleting knife beneath your partner's side of the bed does not even begin to describe the severely warped co-dependencies of Little Deaths. It's the new grey Britain, with a spattering of red masking a rainbow of black, in all its subtle shadings.