John Hawkes, Spoon to be honored at Film Hall of Fame Awards 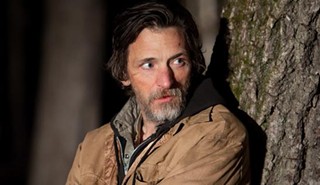 Veteran actor (and former Austinite) John Hawkes will receive the Rising Star Award at the Texas Film Hall of Fame Awards – and indeed, he's come a long way from his debut in the Austin-shot camp classic Future-Kill.

It's a little odd to commend someone with a 25-year career as a "rising star," but then again, Hawkes is definitely having a moment. Following high-profile roles on Deadwood, Lost, and Eastbound & Down, he nabbed an Oscar nomination for his chilling work in Winter's Bone and headlined in two of Sundance 2011's buzziest films, Vera Farmiga's Higher Ground and Sean Durkin's Martha Marcy May Marlene.

The Austin Film Society also announced Spoon as the recipient of the Soundtrack Award. Austin writer/director Jeff Nichols (Take Shelter) will present the award to the band; he previously collaborated with Spoon on the Tokyo-set, super-adorable video for "Don't You Evah" (see below).