After a successful fall tour promoting their book Destroy All Movies!!!: The Complete Guide to Punks on Film, Austinites Zack Carlson and Bryan Connolly have sold an original screenplay called DESTROY to the filmmaking team behind Best Worst Movie. 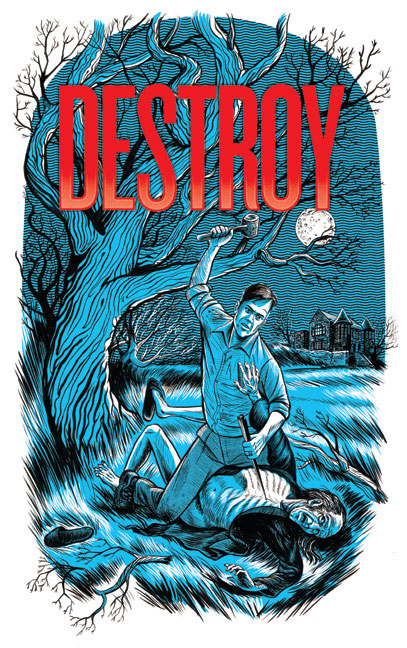 DESTROY concept art
Michael Paul Stephenson will direct the dark comedy about a misguided vampire hunter who, according to Carlson, is really just "a well-meaning man who thinks he's killing vampires, but really he's just murdering old people in Eastern Europe." The film will be produced by Magic Stone Productions, helmed by Best Worst's Stephenson and his wife and producing partner Lindsay Stephenson; Jennifer Roth (Black Swan, The Wrestler) will also produce.

The Eastern Europe locale rules out a local shoot. Says Carlson: "There'd been some discussion about using Romania because it's so picturesque and old and there's some beautiful architecture. But then we found out from people who'd done production there that it's really rugged. Like, there's human waste and strange new insects coming out of the faucets and stuff like that. So Bavaria won." (Cue the angry letters from the Romanian Tourism Board.) Although the vampire craze has – we think – crested, Carlson isn't worried since the movie doesn't actually contain any vampires in it.

"I've always personally felt that the vampire hunter is way more interesting than the vampires themselves. Like, vampires are kind of... they're just drama kids, you know? Like, you'd expect them to wear turtlenecks. They're really boring as far as monsters go.

"But the vampire hunter is always like more tragic and no one ever belives him and he's on this quest, basically risking his life for people who don't care at all and don't believe. ... So we thought it'd be funny to see a vampire hunter in a world that doesn't have any vampires in it."

Casting begins next month, with an aim to start shooting in late summer.