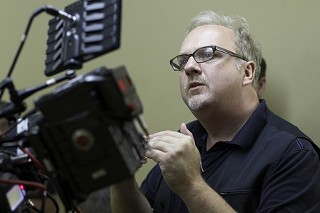 George Hickenlooper, the director of Casino Jack (which opens in Austin this Friday at the Arbor Cinema) was in town one day in late October to present a preview of his new film on the last night of the Austin Film Festival. I spoke with him in the upstairs lobby of the Paramount Theatre late that Thursday afternoon prior to the evening screening.

He was accompanied by one of the film’s stars Jon Lovitz. We had a lovely conversation about the movie and other things, including the trial of Tom DeLay (who is a character in Casino Jack) that was just getting underway in Austin; the state of journalism; and his cousin John Hickenlooper, the mayor of Denver who was running for election as governor of Colorado that coming Tuesday. Right after the screening in Austin, George Hickenlooper was heading to Denver to present his film in a festival there and help support his cousin during the final days of the campaign. Hickenlooper presented Casino Jack in Austin on Thursday night, flew to Denver on Friday, and was discovered dead in his hotel room on Saturday morning. He had died in his sleep.

Hickenlooper moved comfortably between the spheres of documentary and narrative filmmaking throughout his career, although his documentaries remain the work for which he was best known. Some titles include Hearts of Darkness: A Filmmaker’s Apocalypse (directed with Eleanor Coppola and Fax Bahr), Some Folks Call It a Sling Blade, and Mayor of the Sunset Strip. Among the dramas, standouts include The Man From Elysian Fields with David Bowie, and Factory Girl, which starred Sienna Miller in a dramatization of the life of Warhol “it” girl Edie Sedgwick. His last film, Casino Jack, follows a similar structure: It tells the story of the downfall of Washington lobbyist Jack Abramoff. Kevin Spacey stars as Abramoff and brings to the role his distinctive verve. Like Factory Girl, Casino Jack is not a full-on biography or documentary, but neither is it a drama spun from thin air. That flow between storytelling modes is the hallmark of Hickenlooper’s work. What follows below are some excerpts from our conversation about what turned out to be his final film.

Austin Chronicle: Spacey must have been your dream choice to play Jack Abramofff.

George Hickenlooper: Yes, we thought of some other actors, but he’s the one who stood out the most. He’s a consummate classically trained actor. He studied at Juilliard. I love the fact that he’s in theatre. It was pretty easy to get him too. I actually cast him off Facebook. I wrote on my wall: I’m really jazzed about Kevin Spacey for my film. And his producing partner Dana Brunetti, who is a Facebook friend of mine, saw it and passed it along to Kevin. Kevin had liked Factory Girl and was interested in working with me. I was having lunch with him a week later. Off Facebook. I guess it’s not ironic that Spacey [through his company Trigger Street] is one of the producers of The Social Network.

AC: Spacey is rather modulated in this film, leaving Barry Pepper to be the more craven character.

GH: Our culture is so oversaturated with political pundits, political and news shows now. Thirty years ago when a movie like All the President’s Men came out – a very dramatic, sincere film – people paid attention because the only news they were getting was from Walter Cronkite or the newspapers. So it was an exciting thing. But to make a movie now about Washington politics that’s dry and serious, people have enough diet of that already. They’re bloated with it. So I thought a comic approach would be a great way to go.

Working with Jon Lovitz, for example: I always though Jon was a great dramatic actor. I loved him in Happiness. Because he’s a great dramatic actor, his comedy was able to come from a real place, an organic place, as opposed to playing a caricature, which he did so well on Saturday Night Live. So I watched Sidney Lumet’s Network over and over again, which is a very rich balancing act of tone. On the one hand, you have Peter Finch and these great moments of satire – I’m mad as hell and I’m not gonna take it any more – and you have these great personal, dramatic moments. I love that range, and it’s not done by filmmakers a lot today. And I’ll tell you why: Because it’s so hard to market a film. Filmmakers are intimidated by taking a film that’s complex in its tone. And as a result of that, critics aren’t used to it. Hopefully, the film will come across as fresh. I think some may be confused by the tone.

AC: How much research was done?

GH: Norman Snider wrote the original draft, which is a little more serious-minded. And then what happened was, through a series of connections I was able to convince Jack Abromoff to let me visit him in prison. So I made the drive out to Cumberland, Maryland. It’s a federal prison in the western part of Maryland, nestled in the hills of West Virginia, very close to the border. And when I went out there I was sort of expecting to see him zipping around in a golf cart, like Haldeman or Ehrlichman did at Lompoc [prison]. But it was a very stark prison. It wasn’t Leavenworth or Alcatraz, but it was a stark prison. I met him six times. Each time was for six hours. I wasn’t allowed to bring a pen or pencil. But he would regale me with these stories that were very, very funny and very charming. And I didn’t know a lot about Jack. I mean I knew about Jack, but I didn’t know a lot about his personality. I heard he was charming but I didn’t know how funny he was. He was hilarious. I thought he was worthy of his own cable TV show. He could do standup. And he does these great impersonations. So he would regale me with these stories, I’d excuse myself, collect my pen from security because you’re not allowed to bring anything in, go into the restroom, write down notes, smuggle them out of the prison, and then I’d incorporate them into the script, so the script was constantly changing. Jack gave me a lot of great stories. At one point, my career as a documentarian and narrative filmmaker merged when Jack asked me to give this letter he had written to President Clinton to Kevin to give to Clinton, and seemed such a great ending for my movie because it’s kind of how my relationship with Jack ends, even though I as a character don’t appear in the film. It was a way to nicely sew up the narrative arc and also to show him as a lobbyist in action, In the end he’s trying to lobby his way out of prison.

Another great thing was I brought Kevin to visit Jack in prison and the warden gave us his office. And Jack’s really funny and does great impersonations, as does Kevin. So at one point Kevin was talking to Jack as Bill Clinton and Jack was talking to Kevin as Reagan, so you were having a presidential summit. Out of those meetings, and the humor of those meetings, I think it started to reflect on the film.

AC: You have a huge online presence. I’m fascinated by how much of this you pulled together online.

GH: I rant against all the fanboys. These guys go on and on and on about Superman and who’s going to be cast. That’s like saying, “Well, the McDonald’s on Sepulveda has a slightly tender Big Mac while this McDonald’s on Melrose serves Big Macs that are saltier. You’re splitting hairs with mediocrity. And it’s just a guy in a costume. It’s Superman. Read a fucking book, moron. I can’t stand the fanboy culture. I think it’s been very corrosive. And now all of Hollywood, like moths to a light, go to the San Diego comic-book convention to celebrate these movies that are CGI. What’s happened to the American cinema is that storytelling has become more and more detached from reality. Where are the great mainstream filmmakers like Hal Ashby, Sidney Lumet, and Alan Pakula? Those kinds of movies aren’t made anymore. Well, Lumet’s still making them.

AC: You don’t portray Abramoff as the villain.

GH: He’s empathetic. I think there’s a common misperception, in Hollywood particularly, that you have to like a character or sympathize with him. That’s not true. I mean, how many people like Travis Bickle? I wouldn’t want to date him. But you empathize with his loneliness. Or Norman Bates? At one point in Psycho you hope he doesn’t get caught because you’re empathizing with this young boy. You think at the time he’s tormented by his mother. You don’t realize he’s covering for his mother. But you empathize with him. When I was a kid, I always cried at the end of Godzilla, when Godzilla dies and is sinking into the sea. I always empathized with people who run on the fringe of social mores.

Abromoff is endlessly fascinating. I don’t demonize him. I think he is morally redeemed in that moment in the film when he calls out McCain for being a hypocrite. He was vilified by the media but I also think he was thrown under the bus by his own party so that the lobbying problem would appear solved. I do like him on a personal level very much. I think he’s a very charming guy. He did some things that were pushing the envelope, one could say, or straight out breaking the law. But I think his intentions, in his own mind, were good. His friend said, “Jack’s one of the smartest men I know. I just don’t know how wise he is. I think that sort of sums him up. There’s always going to be some level of corruption. It’s human nature. Compared to most other countries, our country is not that corrupt.

And that was it. Hickenlooper and Lovitz wandered off to find dinner before the screening. He gave me his phone number and told me to call in case any questions occurred in the two months before the piece was scheduled to run. “Feel free to call me,” he said. “I’ll be happy to follow up with you.” Then he was gone.

Editor's Note: This post has been slightly amended to correct two spelling errors. 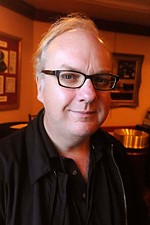