Seems like last weekend's Wizard World Austin Comic Con was enough of a success that the organizers were talking not just about coming back next year, but making the already impressive event much larger. With the positive word from the vendors on the floor, the guests through the door and the celebrity guests, looks like it'll be an easy sell. 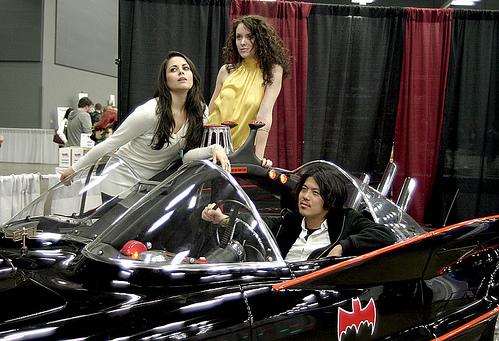 There was an undoubted nostalgia component, with childhood heroes like Gil Gerard (Buck Rogers) and Peter Mayhew (the one and only Chewbacca) rubbing shoulders with newly minted honorary Austin citizens Burt Ward and Adam West.

At the other end of the geek spectrum was the cast of The Human Centipede [First Sequence], returning to the city that gave their cult smash its big Fantastic Fest launch. The three parts of the gestalt beast – Ashlynn Yennie, Ashley C. Williams and Akihiro Kitamura – were in attendance for a sold-out screening at the Alamo Ritz, but were blown away by the response on the convention center floor. Kitamura said, "We're very new to this. We go to the horror conventions and we see so many horror actors, but we're just going and being respectful."

The audience response to the film has not always been what they expected. It was a grueling, physically and emotionally demanding shoot that left the cast drained, and when you're chained ass-to-mouth-to-ass-to-mouth for weeks on end, it's hard to see the humor in the script. Williams said, "When the movie came out, people were talking about it, saying, 'This is so funny, this horror comedy.' We were like, 'This isn't funny, what are you talking about?'"

Yennie added, "It was the opposite of being on set, because when I watch it back now, I laugh at so many parts." 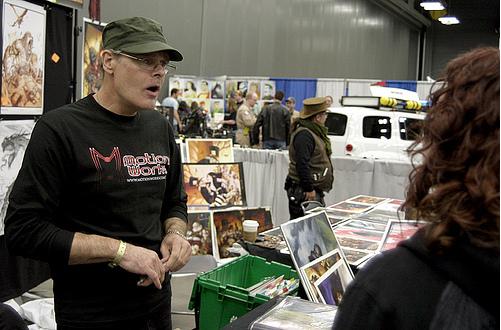 They were far from the only dark cult heroes on the floor. In the two decades since it first saw print in Caliber Presents issue 1, James O'Barr's The Crow and the 1994 film adaptation have become cultural touchstones for many teens. "You have to see The Crow and you have to own two Cure albums," he said. "Every couple of years I get this new generation of fans who weren't even born when this book came out. How did you find out about it? And their parents show it to them, and their friends tell them about it. It actually sells as good now as it did 10 years ago."

With the slew of bad sequels to the original film adaptation of his graphic novel, O'Barr has taken the same attitude as many creators (send the check and leave him out of it.) That's not something he takes for granted: He said, "I don't know an artist or musician that doesn't have day jobs. I love my life now. I get up at six o'clock and I work every day, and I'm excited."

That financial security, so rare for indie comic artists, means he can concentrate on his next two projects: First, a movie of his script Frame 137, and then a new graphic novel called Sundown in Hell. He described it as a panoramic Gothic western, starring "Joan Jett, Robert Mitchum and this seven foot creepy guy that you never see his face." He said, "It very much has a Sergio Leone look to it, and I'm painting it all in these wide Panavision panels, just to keep that look."

He's working with Plano-based MotionWorks Entertainment to bring the project to smart phones. Since he's already painting it in widescreen, he added, "It's ready-made story boards. I think it would a really exceptional film." 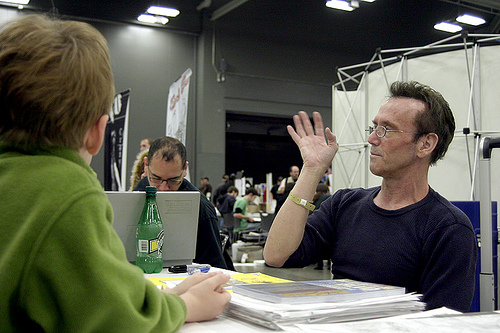 Like a lot of the artists on the floor, O'Barr took advantage of his Austin trip to catch up with some of his peers. He seemed particularly happy to catch up with Bill Sienkiewicz: While O'Barr is the indie icon, Sienkiewicz may be best known for his groundbreaking work for Marvel Comics on Elektra: Assassin. However, it was his work on teen hero title New Mutants that established his innovative reputation: However, the Marvel editorial board originally had much bigger plans for him. He said, "I was offered the X-Men and I turned it down. They told me I was crazy, and I said, I want to try to experiment and play around, so I'd like to find something to fly under the radar."

He's currently jumping between a big slate of projects. Aside from the Dexter Early Cuts web series for Showtime, he's developing a TV series with David A. Stewart of The Eurythmics. He also has another comic series lined up, which he described as "in the spirit of Cormac McCarthy. Sort of like Apocalypse Now set in the West, but done more in a style of surreality, like 300."

In a fitting full circle, the enfant terrible that shotgunned mixed-media creations into the four-color comic mainstream now regularly works with industry legends like Dennis O'Neill. During his Austin trip, he was inking panels for an upcoming Batman story. He explained, "I don't want anybody else inking me, not anymore. I have as much right as anybody else to screw up my own work, but I love working over other people's work, because you get to understand where they're coming from. So there's a little bit of a sponge and osmosis thing that goes on." 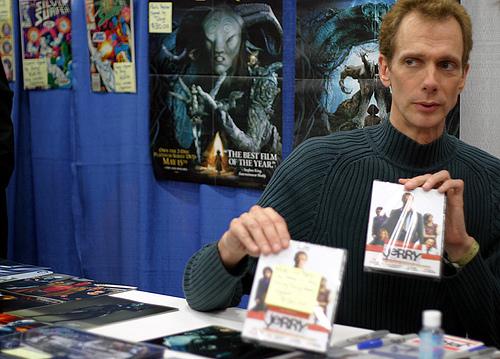 Doug Jones, the actor that breathed life into the gills of Abe Sapien for Hellboy, at the Wizard World Austin Comic Con (Photo by Brandon Bollom)

One of the big hits of the weekend was undoubtedly Doug Jones. Best known as Guillermo Del Toro's go-to guy for a rubber-suited monster, Jones is an accomplished mime and indie actor. His 2009 comedy My Name Is Jerry is out on DVD now, and straight after his Austin trip, he was heading to start filming Don Coscarelli's new film, John Dies at the End. He's also a bit of a teen heart throb (as one young fan gushed to her friend as they walked away from his booth, "I can't believe I just met Billy from Hocus Pocus.") However, his first start, he explained, was a long way from big-budget movies. He said, "When the Mac Tonight campaign for McDonald's came along in 1986, I went to this audition and moved well. So they stuck a moon head on my shoulders for 27 commercials and three years. That marked me as the guy that does this kind of thing, and my career just snowballed from there with referrals."

As for Del Toro, who hired Jones for Mimic, both Hellboy movies and Pan's Labyrinth, he said, "I owe a great debt to [him] for creating roles for me to allow me to be a monster who is a leading man." Jones added, "[He] is very on-board with returning to the Golden Age when Bela Lugosi and Lon Chaney and Boris Karloff were monster actors that were allowed to be movie stars." 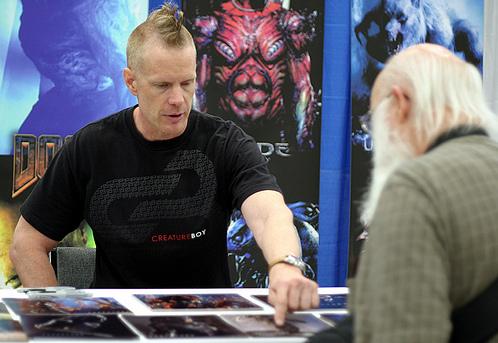 Brian Steele, the man behind the mask of Samael from Hellboy and the berzerker predator from Predators (Photo by Brandon Bollom)

Another del Toro alumnus in attendance was Brian Steele. However, locally he may be better known as the berserker predator from Robert Rodriguez's franchise reboot, Predators. While he and Jones have become the biggest stars behind screen prosthetic, he noted that they never seem to go for the same part. Steele said, "It seems like I'm getting all the bad guy fighting roles, and I don't mind that, because everyone remembers the bad guy."

They're also not just guys in costumes handed to them by the effects crew. According to Steele, they get involved in the process well before shooting starts. "First and foremost, with every character, the movement is lead by the sculpture. So you look at the sculpture and you say, oh, the balance point is here, it should bend here, because the eye will pick up something and we'll say, 'That isn't moving right,' and we don't know why.'" 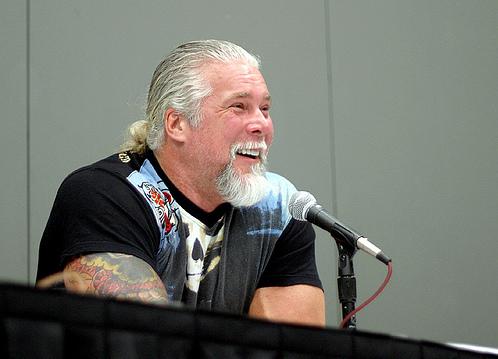 That wasn't the experience for Kevin Nash, the former professional wrestler best known to film fans as Super Shredder from Teenage Mutant Ninja Turtles II: The Secret of the Ooze. When he got his big break out of the ring, it was (he happily admitted) a quick big pay-day in a pre-made suit. Nash has a reputation for speaking bluntly: Fresh out of his contract with TNA Wrestling, he was even less guarded than normal, if a little hung-over for his Q&A on Sunday. "We had a good time on Sixth Street," he told the audience. "From what I remember."

The man known as Big Sexy was pretty blunt when talking about the current generation of grapplers. He said, "It seems like every guy looks like a men's fitness model in trunks with diversified tattoos." He was equally blunt about their in-ring ability when he told one questioner, "You can say, who's the next star that'll carry professional wrestling, and I say, we haven't seen him yet." He did have one prediction: "It's a guy who'll break [UFC president] Dana White's heart. It'll be an MMA guy with no chin but who has everything else."