Bonding for the great beyond 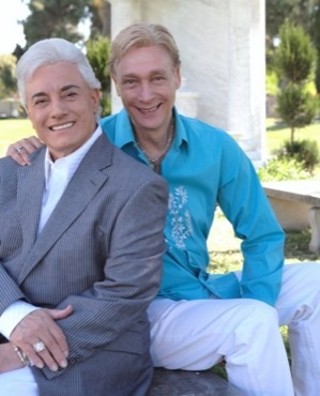 In obvious ways, An Ordinary Couple is about just that. It's right there in the title; it's not ironic; it's kind of the point.

Like most couples 30 years or so into their bond, Orin Kennedy and Bernard Puccio bicker, confer, agree, disagree, entertain, plan, and exchange knowing looks. They are so ordinary, in fact, that they want to be married – but they can't be, of course, because it's California and it's 2003 and they're gay. Perhaps in part channeling the creativity and enthusiasm (and money) that in a more just world they would have put into a wedding, Kennedy and Puccio erect a grand burial monument at Hollywood Memorial Cemetery so they can rest together eternally when they go. The still very much alive pair then throw an elaborate sort of memorial ceremony – really more of an anniversary party – at their own grave site to bring demi-closure to the project.

Into these lives Proposition 8 falls. During the brief period in which gay marriage is legal, the two men get hitched, with all the fabulous trimmings, then watch, hand-in-hand, as that ceremony is subsequently delegitimized. Played out in the two ceremonies that bookend An Ordinary Couple – both of which tell the two men's stories, apart and together, through photos, video, and narration – is a parallel history of gay men and gay culture in 20th century America; as they two recount coming out, their families' reactions, leaving home, buck-wild bar life, AIDS and its casualties, and the gay marriage movement's victories and setbacks, their stories intertwine with that larger narrative.

Directors Jay Gianukos and Susan Barnes capture those narratives in the most straightforward fashion possible, but the lack of stylistic flourish – the almost home-movie quality of the proceedings – underscore the point: It's the story itself that packs the punch, and this couple's story can't help but be extraordinary.