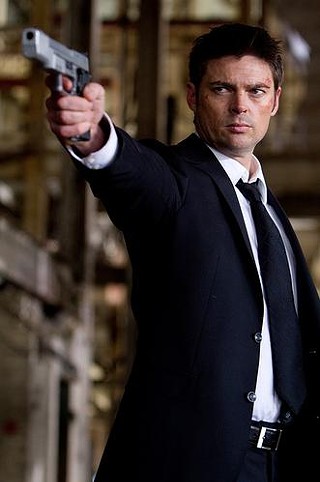 Karl Urban in Red: "There will be no gold codpieces" in Dredd

It's hard to think of a major genre franchise that Karl Urban hasn't been part of: Star Trek, Lord of the Rings, The Chronicles of Riddick, the Bourne movies. And now he gets to have his ass handed to him by Bruce Willis in espionage comedy Red.

Urban was in attendance at last night's pre-world-premiere premiere of the tale of a quartet of retired spies (Willis, Helen Mirren, John Malkovich and Morgan Freemen) who find their quiet decline into old age disturbed by a state-sanctioned wetworks squad. He plays William Cooper, the agent charged with their execution, a part he described as "melding a bad-ass hit guy with a family man and arming him with a conscience." It's a part that involves a lot of gun play and a lot of fighting so, as Urban noted, "One of the bizarre things about what I do is that I acquire a skill set that I can never use in real life."

Red puts Urban as the young pup amongst some veteran talents, but he was most gushing about one of the least publicized cast members: Ernest Borgnine. The McHale's Navy star was only on-set for one day but, Urban said, "It was a trip. Just to hear his tales about old-time Hollywood. He'd talk about Lee Marvin and San Peckinpah. It was just amazing."

Urban be adding more major nerd points in 2012 with the release of Dredd, the second cinematic adaptation of classic British comic series Judge Dredd. After the well-intentioned but fatally flawed 1995 version starring Sylvester Stallone, fans of the comic might be a little nervy about this latest take on a crypto-fascist law enforcer in a dystopian future. However, Urban was quick to put their minds at rest: While he wasn't prepared to give a preview of Dredd's distinctive gravelly voice ("It's a work in progress," he said) he did confirm that some pivotal parts of the character's look in place. Not only will Dredd's trademark helmet stay firmly on his head but, he added, "there will be no gold codpieces in this one."