Director Jang Cheol-so gets an education in US audiences 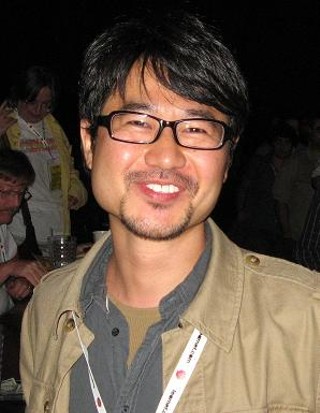 The team behind Fantastic Fest smash Bedevilled almost didn't make it to Austin. Producer Han Man Taeg said, "We were supposed to go to all the cities [in South Korea] where our film is screening, but we thought, this festival is so important, we'd drop everything and come over here."

Good choice: They walked away with the Audience Award for best film.

The slow-burn rural thriller, in which Seo Yeong-hee gives what Marc Savlov called an "astonishing, Oscar-caliber performance," is like watching someone stand on a high ledge for an hour: When they finally jump, the explosion of horror is almost unbearable.

That the Fantastic Fest audience whooped and cheered at that gut-churning moment seemed to surprise first-time director and screenwriter Jang Cheol-so. The screening last Sunday marked his first trip to the US, and he admitted to some culture-shock from being in a nation that he had only seen on the big screen. Talking through a translator during the Q&A, he said, "[The Korean audience] doesn't laugh as much as you guys," but they were moved by the same moments. The end result, he explained, was still a cathartic experience.

Cheol-so got his break in film making as an assistant to leading Korean director Kim Ki-duk (Spring, Summer, Fall, Winter … and Spring, and his impetus to make Bedevilled. When everyone else told him that the screenplay was "too weird, Kim Ki-duk was the only one who told me to do it."

The director also admitted to some American influences, citing Mystic River, Psycho and No Country For Old Men as tonal inspirations. However, the deeply perturbing script was torn from true-live stories about the worst instances of low-grade inhumanity in Korea. He explained that it came from "stories that shock you so much that time stops. So I collected the stories shocked me that much."

So far, Bedevilled doesn't have a US distributor: However Cheol-so happily proclaimed that, having seen the response from the audience, he'd love to see his film back on American screens, complete with the confusing laughter.