Kane Hodder and the joy of latex mutilation 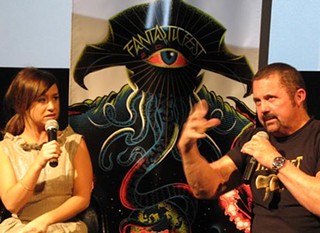 If you're going to do an old-school piece of 80s retro horror like 2006 Fantastic Fest fave Hatchet, you have to do it properly: Sequel!

As Hatchet II director Adam Green explained to the Fantastic Fest crowd last night, this wasn't some cheap cash-in. This body count was planned long ago.

Sunday's double screening saw stars Kane Hodder and Danielle Harris tagging in with Green on the Q&A component of the evening. The director is in the middle of a PR frenzy, dealing with the British cinematic release of his icy thriller Frozen, its US DVD/Blu-Ray release (street date Tuesday) and now the premiere of Hatchet 2.

Wearing its 80s low-budget influences proudly on its blood-splattered sleeves, Hatchet 2 picks up the blade exactly where its prequel left off, with Marybeth (Harris, replacing Hatchet leading lady Tamara Feldman) struggling with a death struggle with Victor Crowley (Hodder), the supernatural and super-ugly killer of the swamps. Taking time for some exposition, courtesy of gravel-and-treacle-throated horror icon Tony Todd, the blood starts flowing from some of the most ridiculously inventive killings since Freddy Krueger got a TV deal.

Calling the film a testament to hard work and imploring anyone in the creative world (yes, even journalists) to keep plugging away, Green explained that the seeds to his schlocky sequel were planted in the fertile soil of his fright-filled first installment. From the pig-masked kid to the extra-long chainsaw, everything gets a pay-off this time around.

Green also admitted that his movies are all set in the same world (we shall dub it the Greenverse.) Eagle-eyed fans will spot some pretty overt references to Frozen and Halloween short Jack Chop, while the die-hard goreheads will get all gooey over a Behind the Mask: The Rise of Leslie Vernon moment. Such references have always been there in his films, he said, "But we were a little more obnoxious about it in this one."

Gory as the first Hatchet is, this was almost three times as bloodstained, and Green has the receipts to prove it. In total, the two movies spilled 200 gallons of fake blood, plus a butcher's shop of innards, gizzards, entrails and, a-hem, sweet meats. "At one point, we were setting off blood mortars," Green recounted.

That's not the only carnage he has left in his wake: Exiting to sprint into the other screening, he dared the moderator to ask Hodder (a man so tough he tore his bicep half an hour into filming a fight scene and stuck around for the other six and a half hours of shooting) why he's such a pussy. Hodder, who has a double part as deformed killer ghost Victor and his father, simply replied, "I'm not a pussy. I'm a bitch."

"He's my bitch," grinned Harris, who may be the tiniest action heroine ever and was quick to admit it. The shotgun she wields at one point was so long she couldn't reach to cock it and during her fight scenes with Hodder she could barely straddle him. Even the rubber prop hatchet, she said, was so heavy "they had to glue it to my hand."

Of course, the free-flowing blood and easy access to a toolbox full of terror meant Harris got to cut lose, Hodder-style. Midway through her own carnage-creation, she realized, "I'm an absolute fucking lunatic. This is so much fun!"