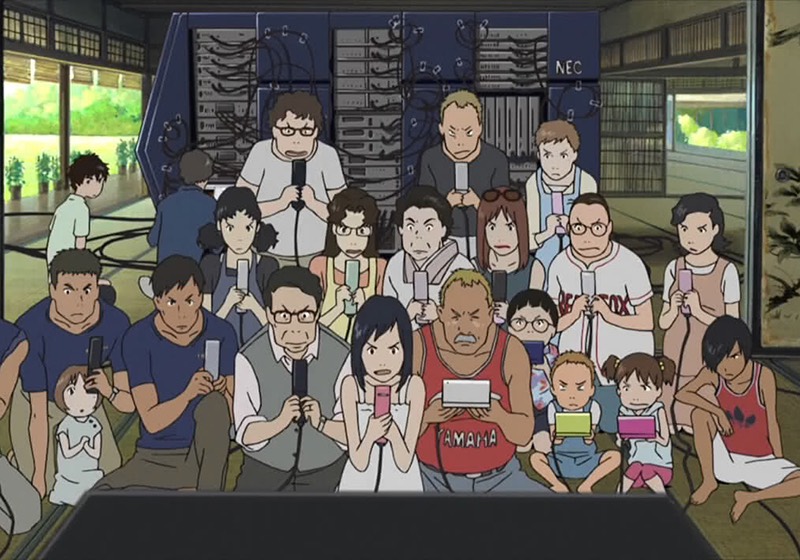 The funny thing about modern technology is that it's everywhere: Even in rural Japan, it seems like everyone has email, two blogs and a Tumblr account. The remarkable Summer Wars may be one of the first movies to really approach that ubiquity, and not come off as bad cyberpunk.

Along with nitro-speedster Redline, Summer Wars is the second film from Madhouse Studios at FF 2010, but it's a virtual world removed. Categorizing it is a near-impossibility: Sort of slice-of-life, sort of techno thriller, sort of action flick, not solely anything.

High school senior Kenji Koiso (Ryūnosuke Kamiki) is supposed to be spending his Summer before college as a low-level sys admin on Oz, a mash-up of Second Life and Facebook that has become a global phenomenon. When it looks like Kenji may have hacked the site's security codes, it could spell disaster: But he's actually up in the mountains, pretending to be the boyfriend of the prettiest girl in school. Natuski Shinohara (Nanami Sakuraba) told her her extended family that she was bringing her new beau to the massive get-together planned for her grandmother's birthday.

Enough plot there for you? Cram a rogue AI that's hacking Oz accounts, a black sheep uncle, a few hundred years of Japanese feudal history, and a satellite headed for an asteroid into the mix. It's a huge and daring project that, as it pulls all these disparate plot line together, becomes a surprisingly sweet and tender concoction.

The runaway technology plot is far more The Social Network than it is War Games, but it's totally its own film. The huge extended Shinohara family are a roiling mass of crazy uncles and interfering aunts, but they quickly become endearing, and that's what's important. Summer Wars isn't a film about technology, and it's definitely not a jeremiad against online lifestyles.

Instead, it's a smart and winning observation about how people use technology. That means its really about people. There's no Matrix-esque confusions about what's real or not: Instead, the risks and benefits of relying on the Interwebs too much, and trusting such sites as perfect, are shown in human terms.

Director Mamoru Hosoda (The Girl Who Leapt Through Time) has come a long way from his time on merchandising machine Digimon, but it arguably prepared him for blending a real and virtual world. That he can have flying CGI whales and gorgeous hand-painted Tokugawa-era castles in the same film and not have a jarring clash of styles is amazing enough. That he makes it look so easy is probably the greatest testament to his skills.

Calling this a techno-drama is like calling Gone With the Wind a war film: Yeah, but no. It's little wonder that this film walked away with the 2010 Nippon Academy-sho Association's animation of the year. Seriously, go see it with someone you direct message.