Fantastic Fest: 'Let Me In'

Opening night at the Paramount, with the geeky spirit of FF fully intact

Had any of the Fantastic Fest faithful worried that the festival would lose its essential geeky fantastic-ness by moving the big premieres to the grown-up Paramount Theatre, no worries: Tim League is not afraid to rock a Viking loincloth at a historic landmark.

At opening night film Let Me In, FF founder League took the stage in an overbig, too-adult-seeming suit... only to tear it off and reveal the Viking gear, in a “mortifyingly offensive” (League’s words) homage to the festival’s Norweigan films sidebar. There was dancing and a singalong, with Agnosia director Eugenio Mira bouncing around, too (League later led the theatre in singing "Happy Birthday" to him), and when it was all over, the audience toasted each other with vials of green-milkiness and took the hokey horror-movie “Oath of the Green Blood.”

So, yes, the spirit of Fantastic Fest is still fully intact at the Paramount.

Another pre-show entertainment was surprise guest (and Oscar-winning composer) Michael Giacchino, who introduced the (totally charming) Texas Boys Choir. They sang from Giacchino’s spooky Let Me In score – the perfect lead-in to the movie itself.

And what of the movie itself? Matt Reeves’ take is a mostly faithful adaptation of Swedish vampire film Let the Right One In (with a few shocking curveballs) that does right by the original but stands rather beautifully on its own two feet. (It opens in Austin on October 1.)

Post-film, Reeves took the stage with Giacchino and cast members Kodi Smit-McPhee, Elias Koteas, Jimmy Pinchak, and Dylan Minnette, who plays the film’s terrifying kingpin bully. “How does it feel have 1,000 people hating you?” League asked him. The young actor grinned back, “It feels wonderful.”

Reeves cited Dial M for Murder and In the Mood for Love as influences for the film, and Koteas talked about how enraptured he was with the original script. He plays a policeman in the film, a part not featured in the original, and when asked what drew him to the part, Koteas responded, “The part of the policeman was the only available.”

It was Koteas’ first time to see the film, and he was visibly moved by the experience. “I’m standing up here, and I’m just trying to keep it together,” he said. “It was great.”

More Let Me In 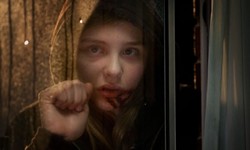 But Will It Translate?
English-language remake of Let the Right One In to open Fantastic Fest